Rafael Leao has been one of the key players in the Rossoneri camp. After moving from LOSC Lille in the 2019-20 season, he has changed the fortunes of the club and has helped AC Milan lift the Scudetto once in 11 years.

Leao came through the youth ranks of Sporting CP in Portugal. He scored one goal in his three Primera League appearances. He scored five goals and provided three assists in the UEFA Youth League. He joined LOISC Lille in 2018. His stay with the French team was a short one, due to some discrepancies. During his stay with Lille, he started 16 matches out of 24 matches played. He scored eight goals, with six coming in seven matches.

AC Milan came knocking at his door, seeing his form. They got the Portuguese for a reported sum of €29.5 million. Like any player, it took him some time to settle. Last season, he scored 11 goals and was credited with eight assists. He finished as a joint-top scorer with Oliver Giroud. He plays as a wide attacking midfielder, or the position suggests he is a winger. He occupies the left berth but can also play in the middle. He plays as an inverted winger, as he is right-footed and he likes to cut inside the box and take a shot. 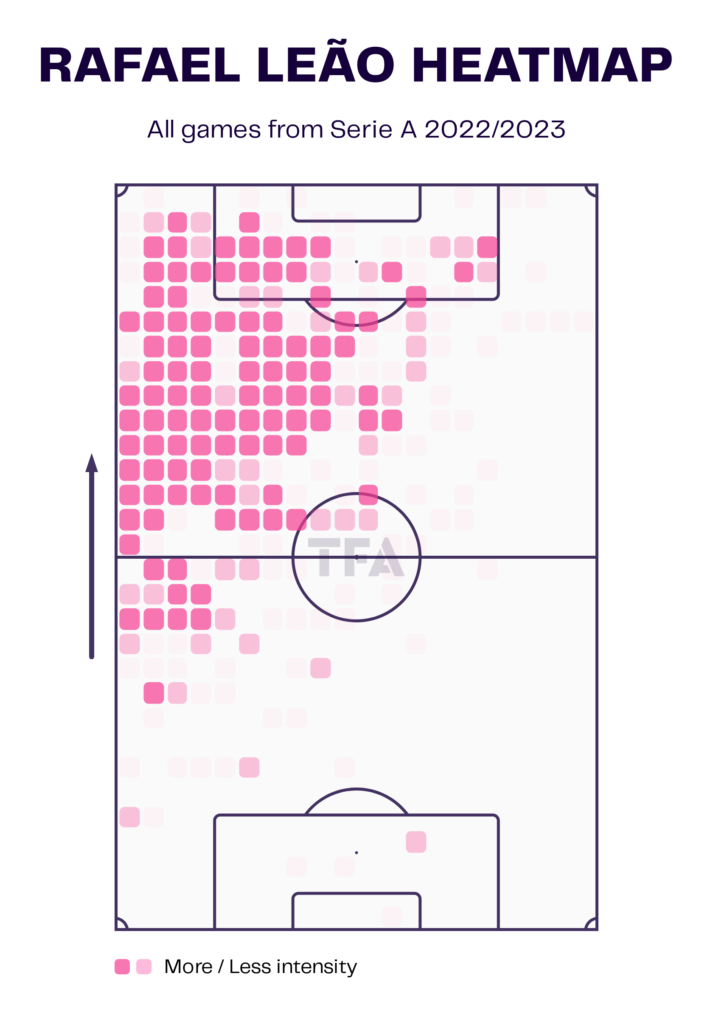 His 2022–23 heat map shows that he did most of his work inside the left wing, but he also drifted to the middle and played some in the right-wing too. The dark pink bar indicates where he took the most action. Leao is a mix of technical ability and the ability to take on defenders with a pace to burn. 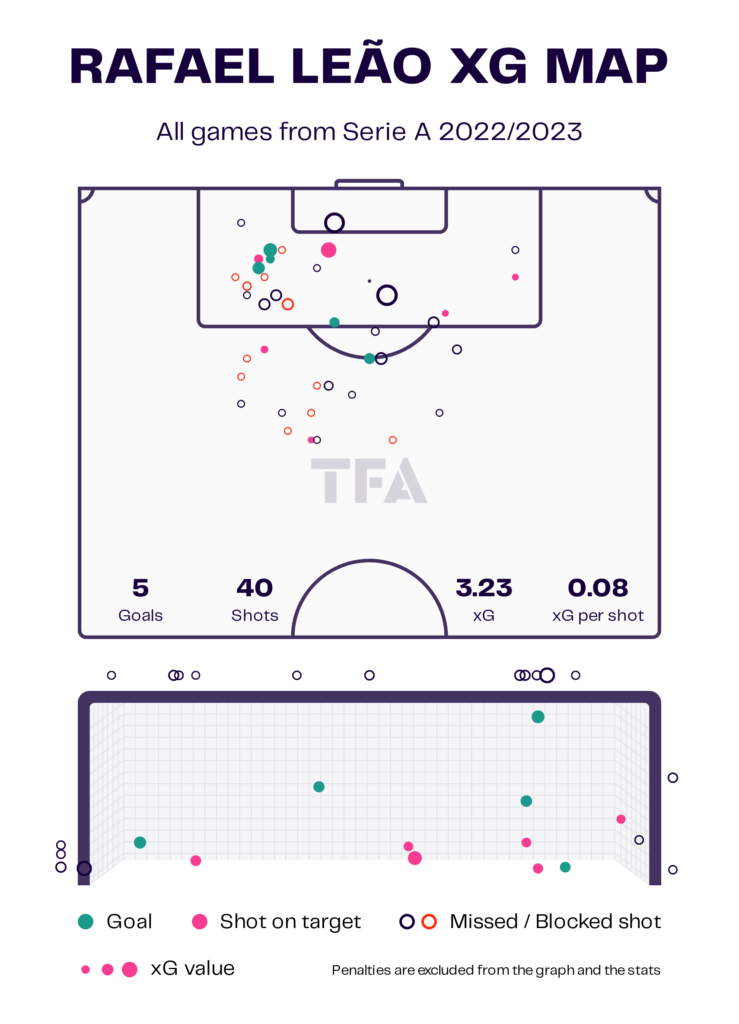 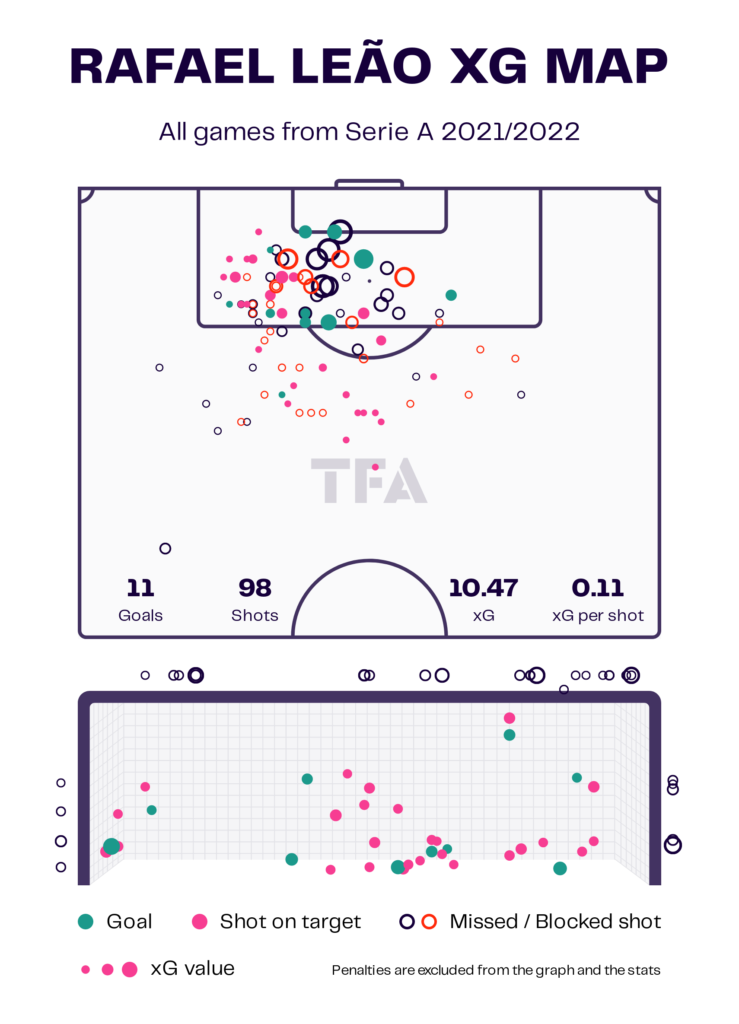 Last season he scored 11 goals, and he racked up a very high xG of 10.47. He likes to cut in deep from the wing and likes to take a shot, irrespective of whether it’s a goal or not. It is shown by his heatmap, where he made 98 shots, of which he was on target 38 times. This season, he has scored five goals already with an xG of 3.23. Last season he had an xG of 96 percentile, and this season he has an xG of 97 percentile. 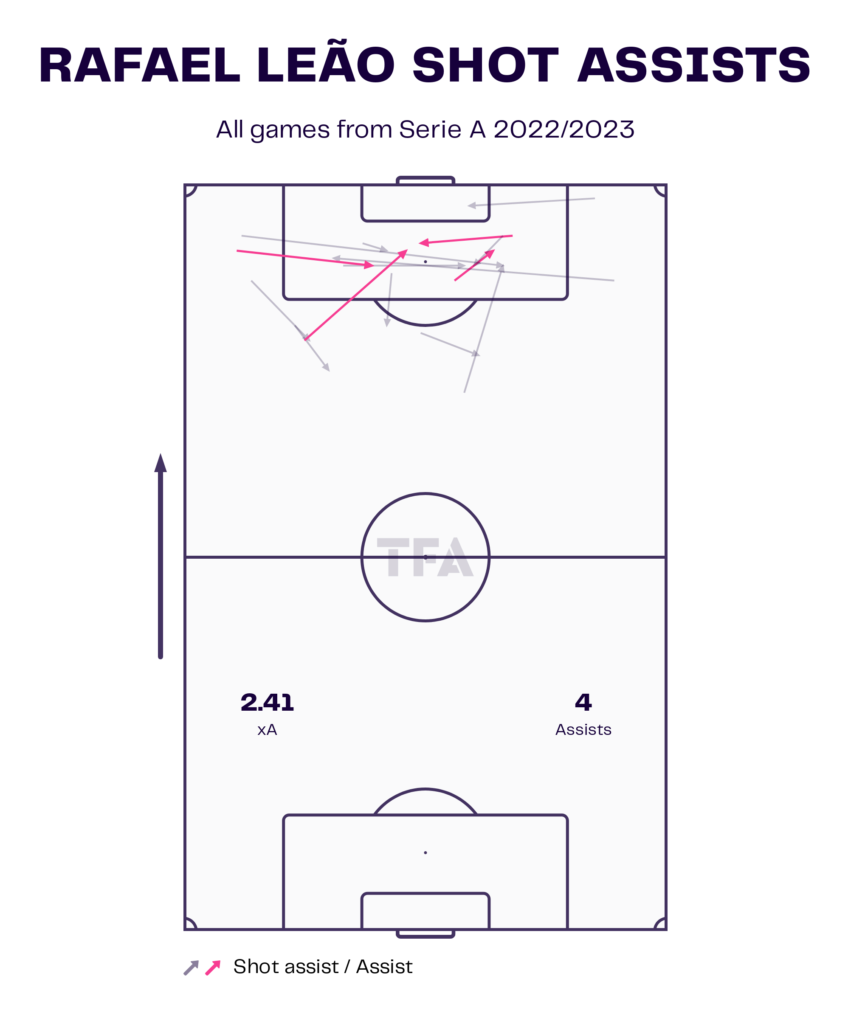 A threat from the wings 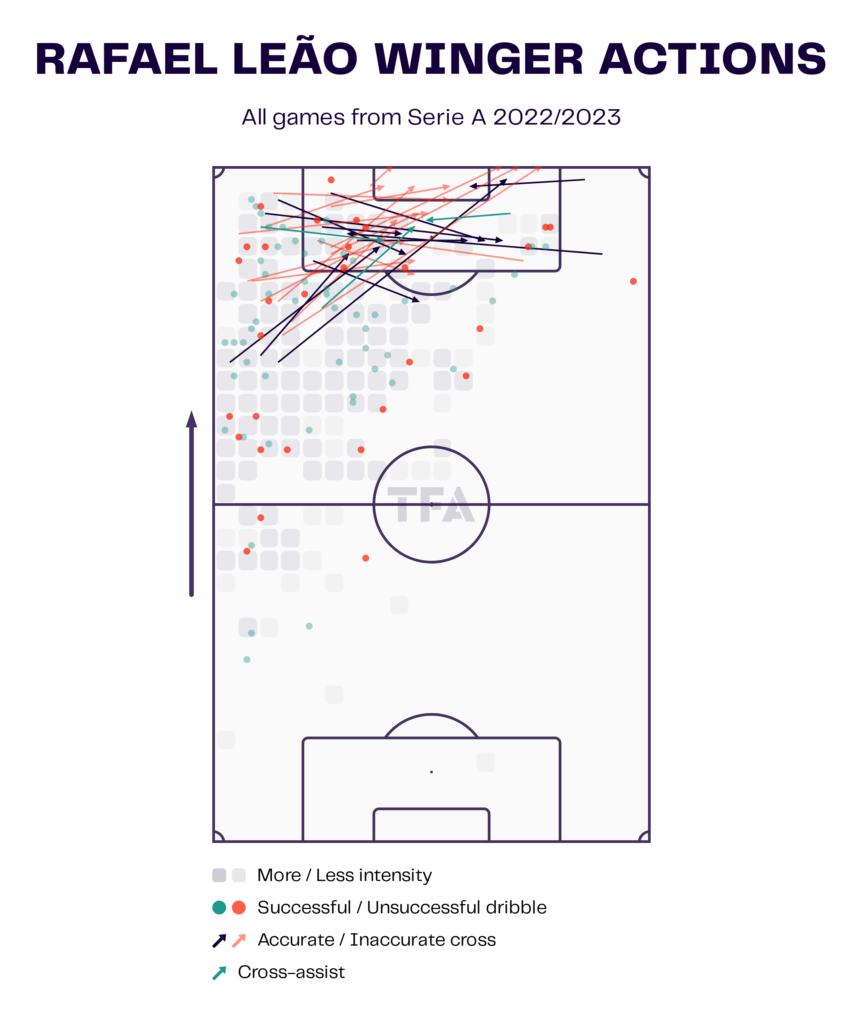 Rafael Leao is a good dribbler. He is confident enough to dribble past players with ease. He tries more dribbles than any other player in Serie A. Last season, he made 3.39 dribbles per 90, putting him in the 98 percentile. This season, he has made 1.81 dribbles per 90, taking him to the 98 percentile. While dribbling, he is a joy to watch; it seems the ball is hugging his feet. The blue dots suggest that he made most of his dribbles in the left wing and the middle third, and some inside the penalty box. His confidence in his shooting ability to score regardless of the angle and direction

The green arrow is where he made a cross, but it turned into an assist. He had a three-point assist. He made 0.5 accurate crosses per 90, which takes him to the 33 percentile. which is quite low for a player of his calibre. The black arrows are the successful crosses he made. The Portuguese like to make a run out wide, attempting dribbles and showing his raw pace, making defenders guess as he makes penetrating, dizzy runs into the box and whips up threatening crosses or crosses that turn into assists.

AC Milan did well to hold on to their Portuguese superstar. Milan will be hoping that Leao stays on top of his game and help them to retain the Serie A title.