AC Milan are leading the race to sign Real Madrid’s three-time UEFA Champions League winner, Marco Asensio. The Spanish club have put their forward on sale after signing him in 2015. The 26-year-old is one of the top-rated players in modern football and has a lot of experience in top-level football. AC Milan are in search of players who can help them to retain the Serie A title and boost their chances of a UEFA Champions League title. They need players who can help them strengthen their defence, improve their midfield, and solve their right-wing problem. Asensio features on the right, and the Spaniard could be the perfect long-term solution for Milan.

Asensio made 42 appearances in all competitions for Real Madrid last season. The Spanish international scored 12 goals and provided two assists. He made eight appearances in the UEFA Champions League but started in only two matches. He scored a goal and assisted twice to help his side clinch another title. 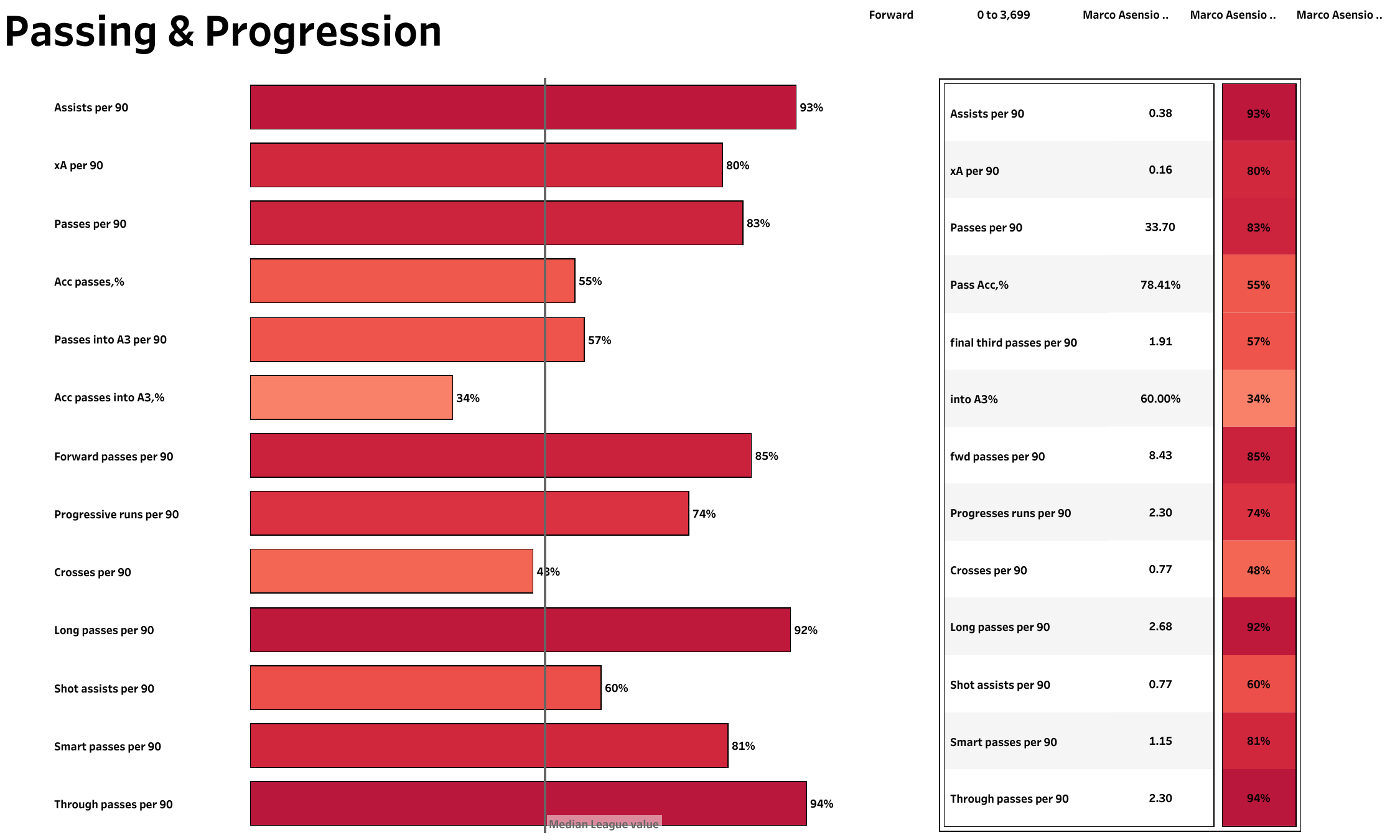 When looking at the above chart, the general rule is that the longer the bar, the better the performance — you can see the league average in the middle, and the % is the percentile rank the player is in. The above viz shows the passing stats of Asensio in comparison to other forward players in the league. In this elite competition, Asensio provided his only two assists of the season. He averaged 33.7 points with a 78.4% passing accuracy rate. Marco Asensio has a high percentile rank for attempting long passes and through passes. The 26-year-old has a variety of passes in his bag and could prove to be handy with the ball at his feet. 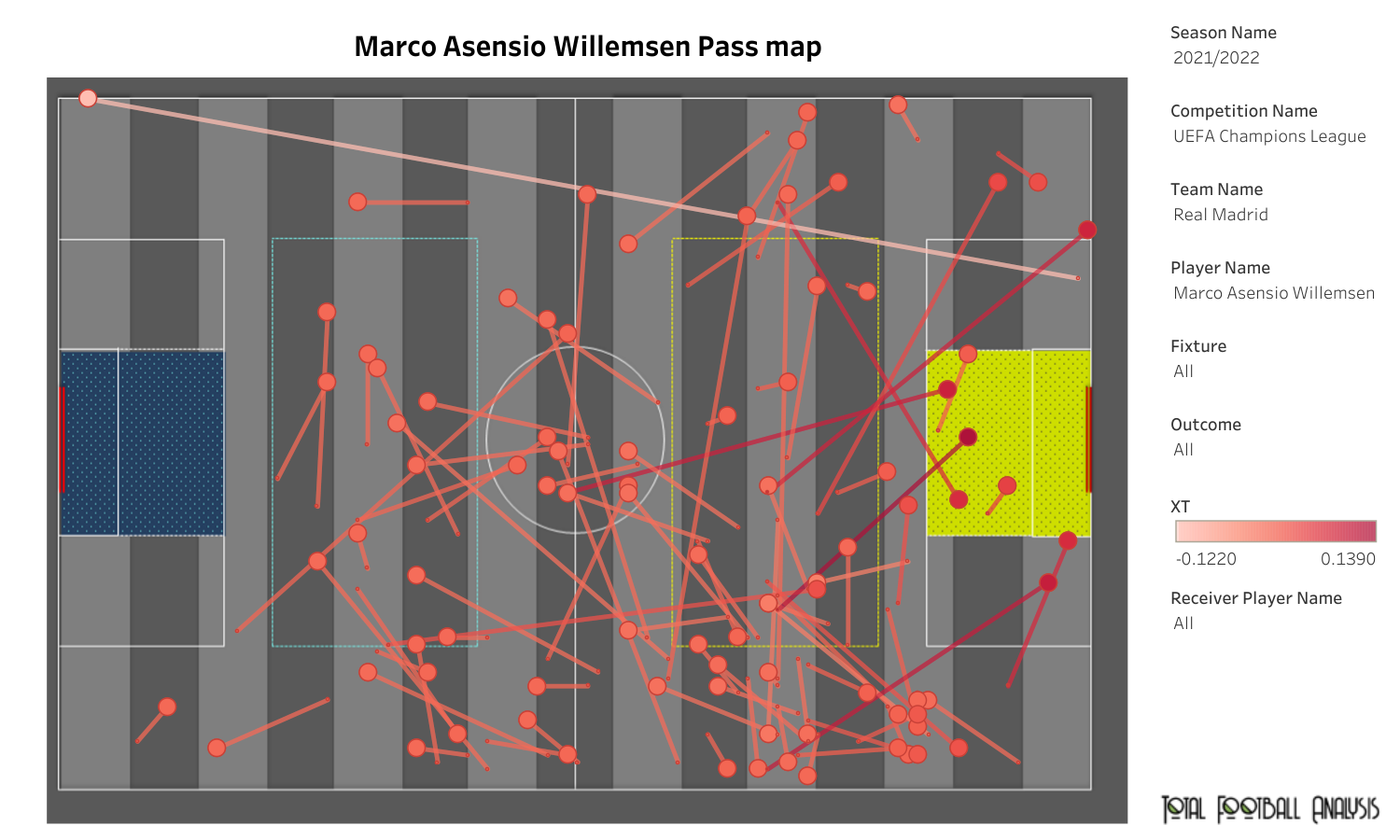 The above viz shows the pass map of the player in those eight appearances. By looking at it, we can observe that Asensio has attempted to find his teammate inside the opposition’s penalty box. Most of his passes were directed towards right-back Dani Carvajal. 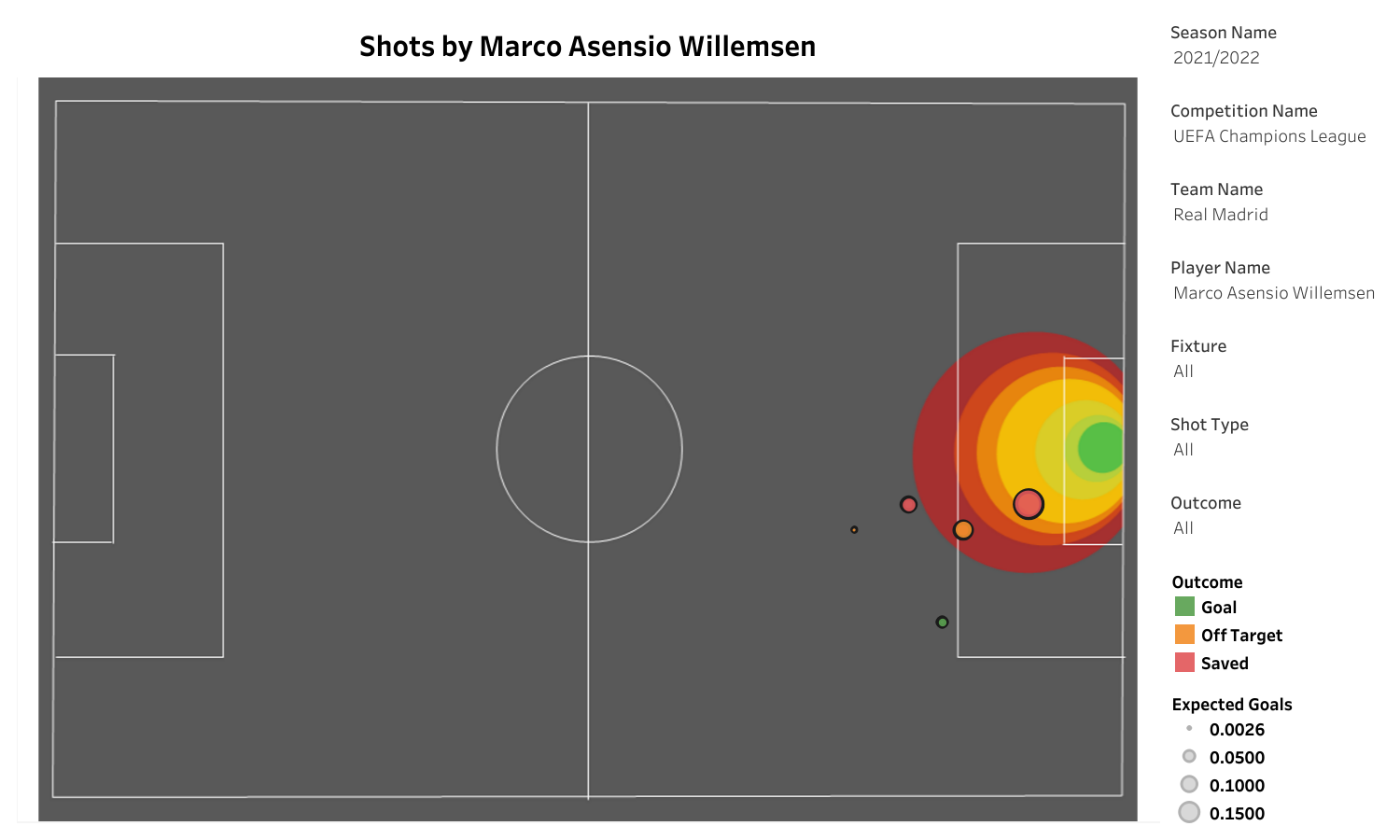 Asensio was involved in 5.36 attacking actions per 90 minutes with a 28.57% success rate. He struggled to create attacks for his side but was effective on some occasions. The above viz shows all the five shots attempted by him in the Champions League. Asensio scored his only goal in the competition from the edge of the penalty box. He likes to cut inside and attempt his shots from his favoured left foot. The Spaniard averaged 3.8 touches inside the opposition’s penalty box and can create threats from inside the box.

The Real Madrid superstar could be on the move away from the Bernabeu. He is not in the plans of the manager and is likely to represent some other club. Asensio has one year left in his contract, and Real Madrid will get a good price on his sale. AC Milan requires top-quality players on the right side. Marco Asensio can provide good quality on the pitch and turn out to be a valuable signing for the Rossoneri.