In their quest to earn titles in the upcoming seasons, AC Milan are targeting Real Madrid attacking player Marco Asensio to strengthen their squad. The Rossoneri are challenging their rivals, Inter Milan, for the Serie A title this season and have shown a lot of improvement. However, they are short of attacking options, and inconsistency from some of the players has made them look for other options to fulfill their roles. Asensio has struggled with injuries in the recent past, but the player has recovered well and has featured in 21 LaLiga matches and five UEFA Champions League matches this season. 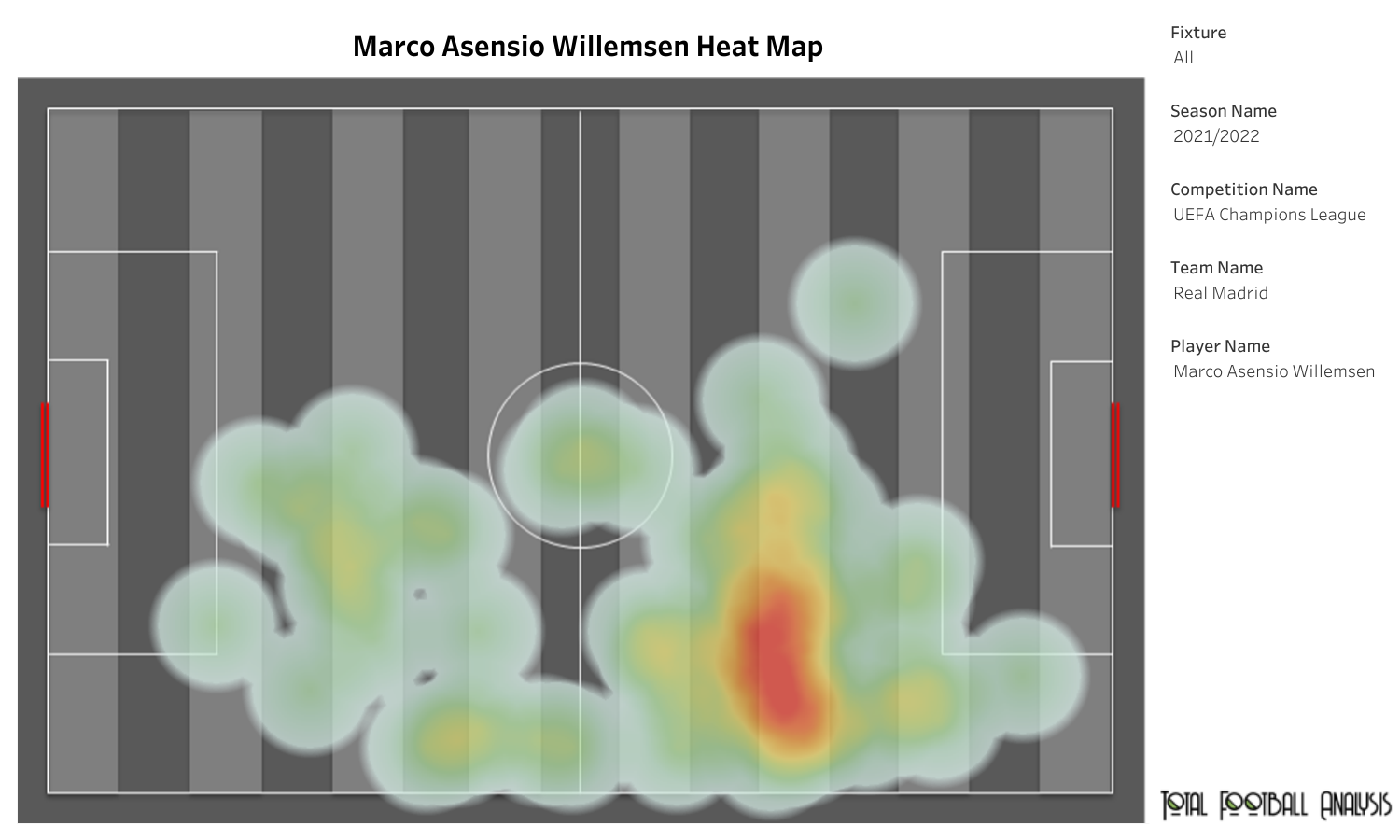 The above heat map shows the position of the player in five appearances in the UEFA Champions League. Marco Asensio made four appearances in the group stage, and all of them were from the bench. He started in Real Madrid’s 0-1 loss against PSG in the first leg of the Round-of-16. Asensio has scored a goal in the Champions League this season and even has an assist to his name. He has attempted three shots and has taken a single touch inside the opposition’s penalty box. The player has spent 112 minutes on the pitch and has featured on the right. 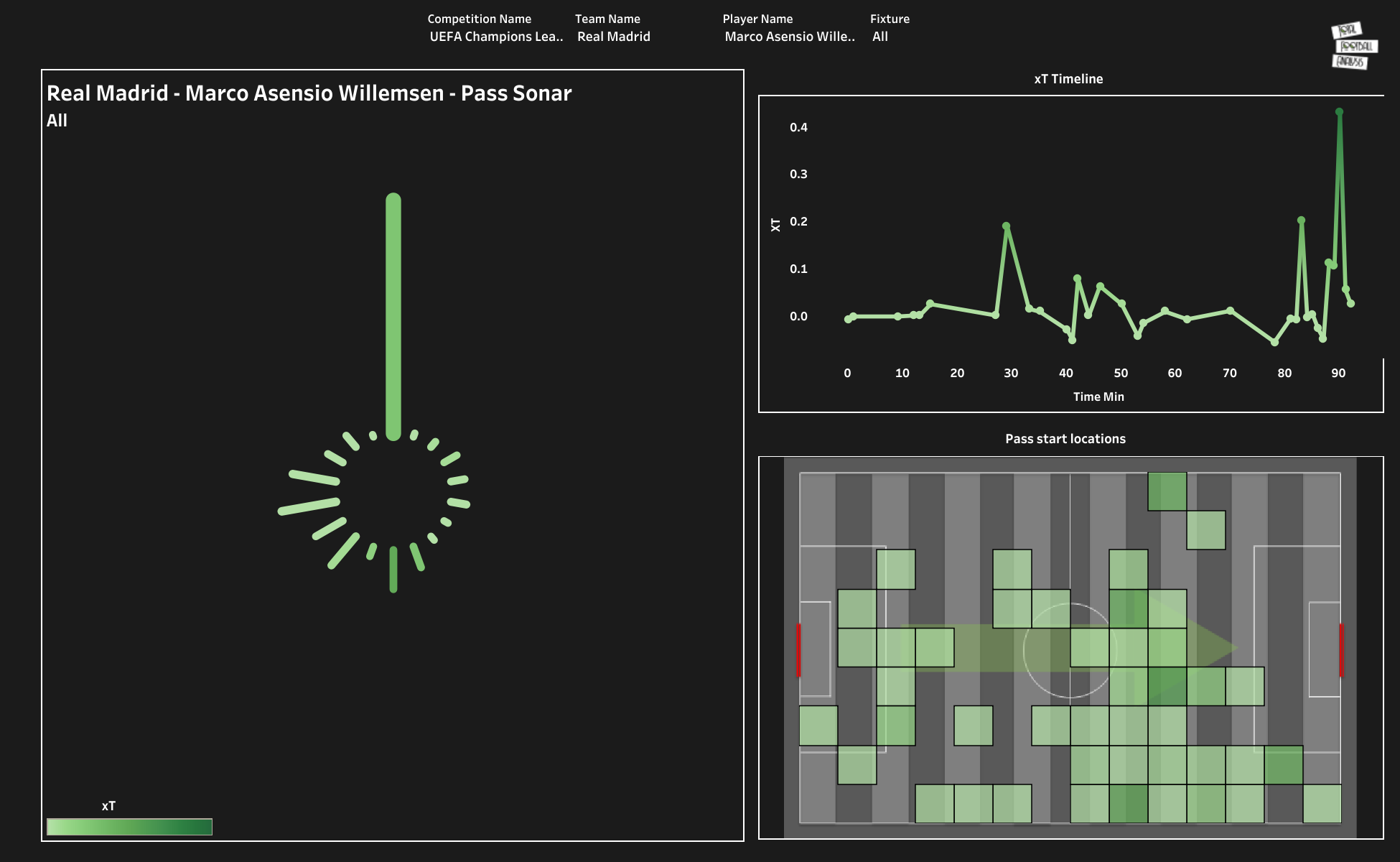 Marco Asensio has attempted 59 passes this season. The above viz shows the pass start location as well as the xT timeline of the player. He is yet to attempt a pass from inside the opposition’s box but has created a lot of threats towards the end of the match. His 59 passes included seven long passes, four through passes, and one smart pass.

Asensio has made 21 appearances in the LaLiga this season and has scored seven goals. He has been a regular part of the Real Madrid XI in recent matches and can score goals from outside the opposition’s penalty box. The player likes to cut inside from the right and makes use of his left foot for attempting shots in the match. 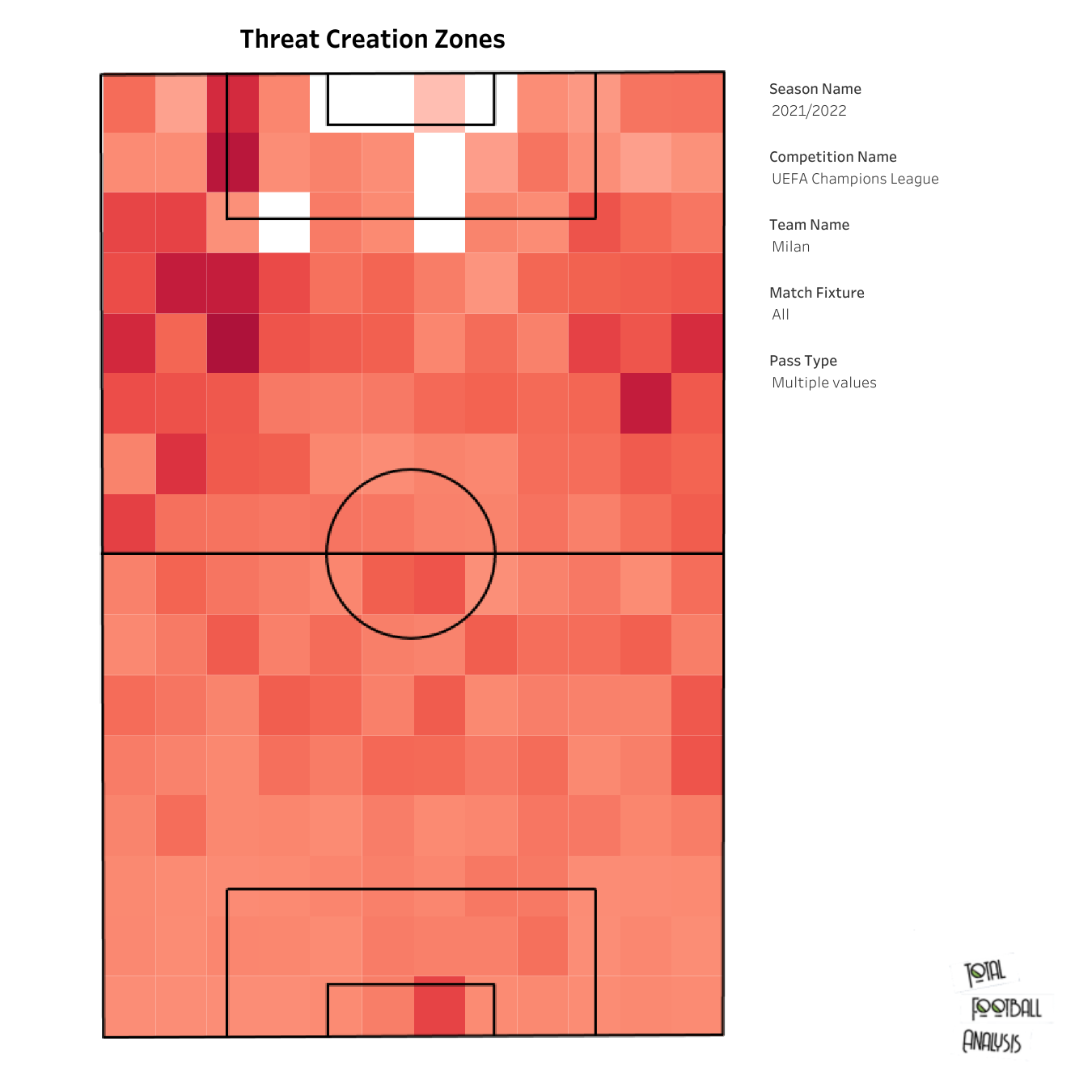 The above viz shows the threat creation zones for AC Milan this season. Milan like to attack from the right side. Rafael Leao leads the attack on the left and is supported by former Real Madrid player Theo Hernandez. Both these players have been effective on the left side. Milan have struggled to find consistency on the right. Week in and week out, Junior Messias and Alexis Saelemaekers are fighting for the right-wing spot, and none of them have been consistent.

AC Milan have good ties with Real Madrid when it comes to the transfer business. They will try to enquire more about Asensio, who will be out of contract in 18 months. However, Real Madrid might not sell the player as he has got a lot of potential and could be a future leader at the club. The Rossoneri will compete with the other clubs to acquire his services.