AC Milan are the latest team to have joined the battle to sign Chelsea youngster, Levi Colwill. The 19-year-old is being chased by top European clubs as Chelsea look to cash in on the youngster. Colwill spent the last season on loan at Huddersfield Town in the EFL Championship and helped his side to reach the playoff finals of the second division league. AC Milan are short of options at the back and are in search of a centre-back. They missed out on signing their main defensive target, Sven Botman, who recently joined the English Premier League club, Newcastle United. AC Milan will be featuring in the UEFA Champions League next season, and the Serie A Champions will like to go with options in every position for a big season up ahead. They already have an English defender, Fikayo Tomori, who was also signed by Chelsea. Tomori became a regular last season after some impressive performances on AC Milan’s road to the Scudetto. They might be expecting the same from Colwill, who gave an impressive defensive display for Huddersfield Town. 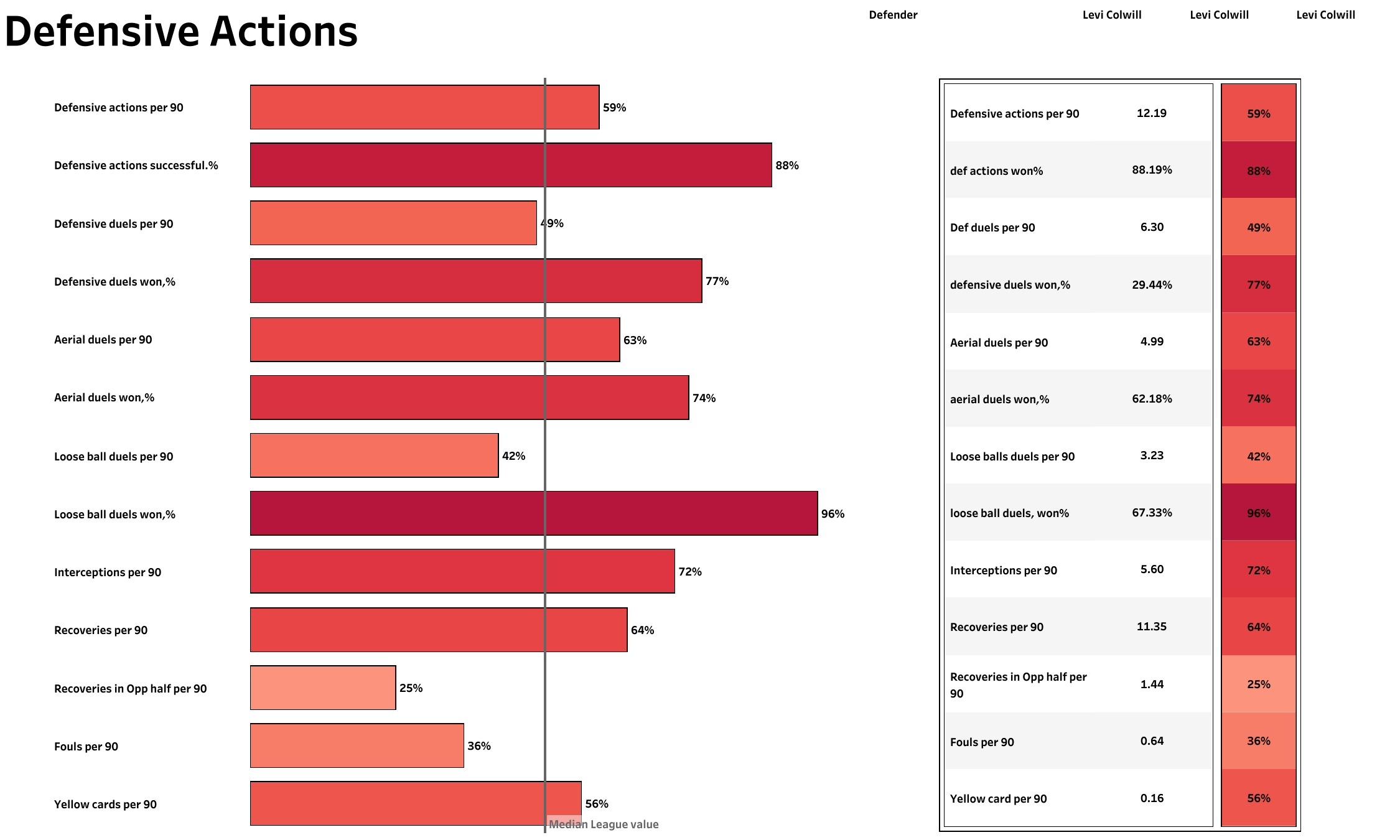 Colwill made 31 appearances in the EFL Championship for Huddersfield Town. The defender scored two goals and provided an assist to his teammate. He played as a left centre-back in a three-man defensive line for his team. When looking at the above chart, the general rule is that the longer the bar, the better the performance — you can see the league average in the middle, and the % is the percentile rank the player is in. Colwill averaged 12.19 defensive duels per 90 minutes with a high success rate of 88.19%. He was strong in the air and won 62% of his aerial duels. His highest percentile rank was in winning the number of loose ball duels. 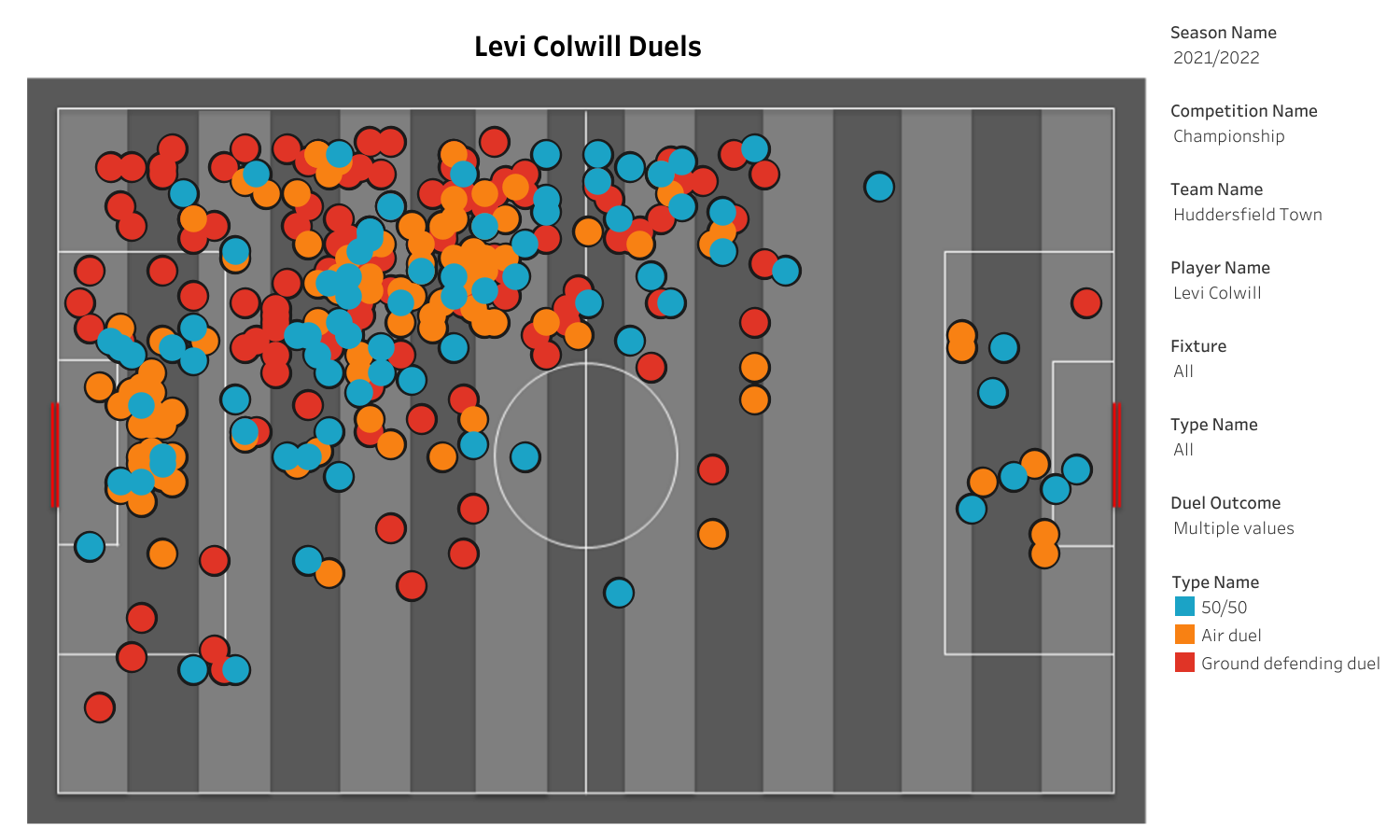 The above viz shows all the duels that were won or ended in a neutral result. As mentioned earlier, Colwill played as a left centre-back and gave defensive cover to the left wing-back. He won most of his duels in the middle third. The duels map shows that Colwill won most of the loose ball duels high up on the pitch to end the opposition’s attack. Likewise, he intercepted most of the passes attempted by the opposition in that particular area. 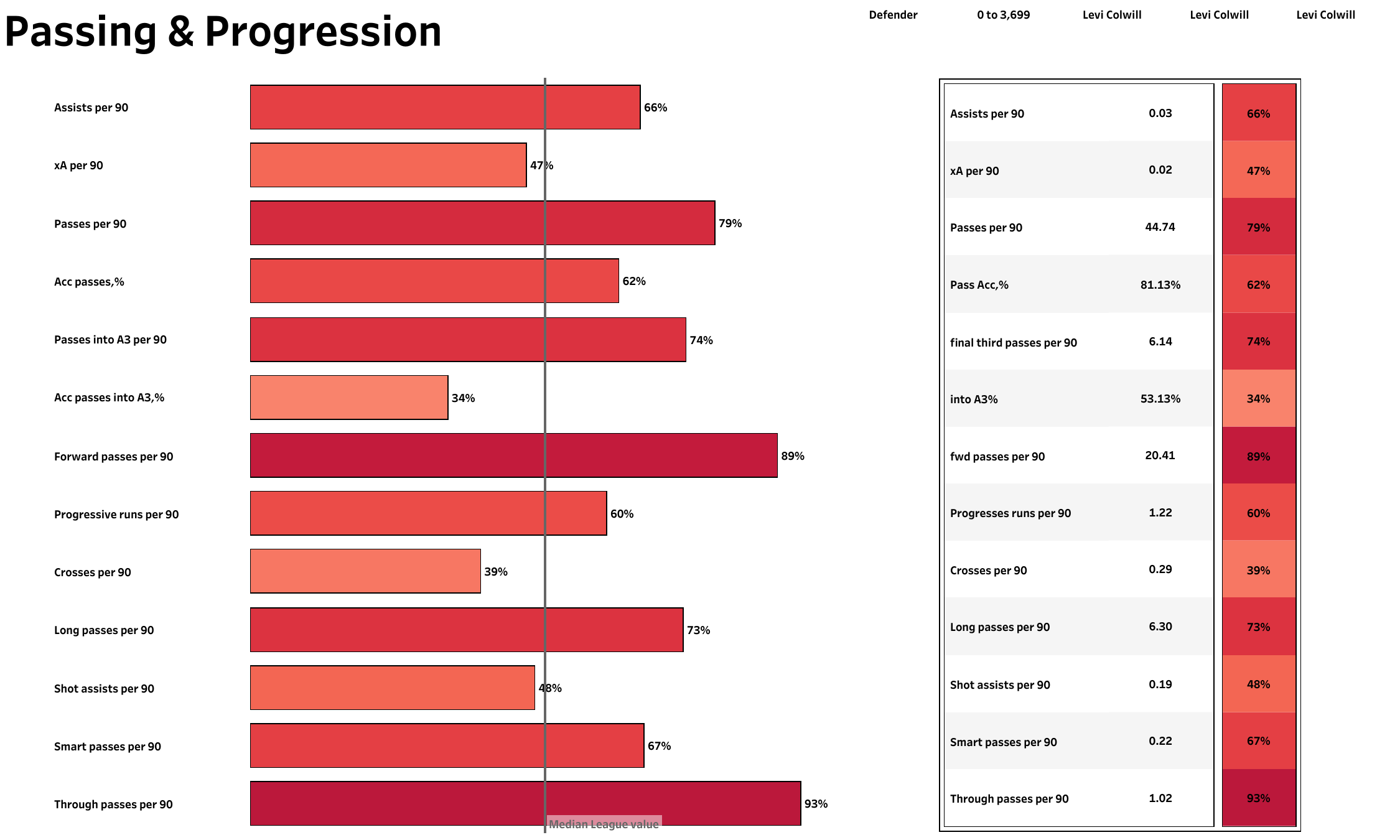 Colwill averaged 44.7 passes per 90 minutes with an accuracy rate of 81.13%. Almost half of the passes attempted by the player were forward passes, and that shows his ability to create plays from the back. The 19-year-old was highly ranked for attempting through passes. He averaged more than one through pass per 90 minutes.

Levi Colwill is likely to join a new club in the summer. AC Milan need a minimum of two centre-backs after injuries nearly cost them the title. They are trying to sign players for the long term and have already included a few youngsters in their first team. This could be a very big opportunity for the English defender, and he might join AC Milan if the terms and conditions are met by the Italian side.