Georginio Wijnaldum left Liverpool after a five-year spell at the club and joined French giants PSG. He won a UEFA Champions League title and the English Premier League with the Reds and went on to win Ligue 1 in his first season with PSG. The Dutchman made 37 appearances, and these included 22 starts. He scored three goals and provided three assists in his debut season. PSG are now considering selling the player and has made offers to several clubs, including AC Milan. The Italian champions are also looking for midfielders and might consider a loan move for the 31-year-old. He has played over 200 matches in the English Premier League and Dutch Eredivisie. Wijnaldum can run from box to box and score goals for his team. Some of the stats from the previous season show what the player can add to a young AC midfield if AC Milan consider signing him. 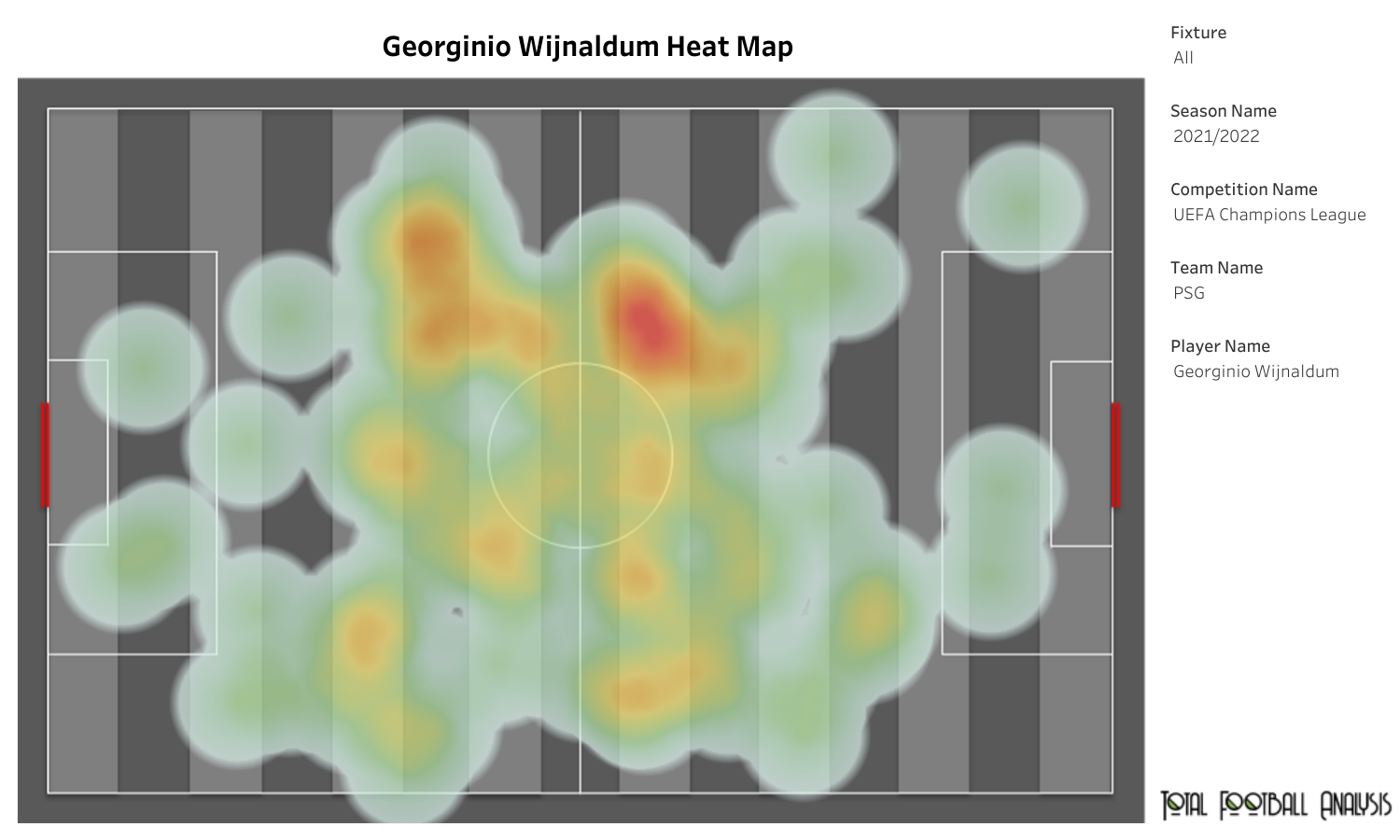 The above viz shows the heat map of Wijnaldum from his five UEFA Champions League appearances. He played in the midfield three and mostly on the left. The Dutchman made five appearances, which included three starts. He scored a brace against RB Leipzig to earn a draw for PSG against their German opponents. Wijnaldum played an attacking role in comparison to the other two midfielders. He averaged only 31 passes per 90 minutes and was ranked low amongst other midfielders for attempting passes. However, the player made some runs into the opposition’s penalty box and averaged around two touches inside the box per 90 minutes. His league season was a bit disappointing as the player was unable to cement a place in the starting XI. He made 31 appearances, and that included only 18 starts. 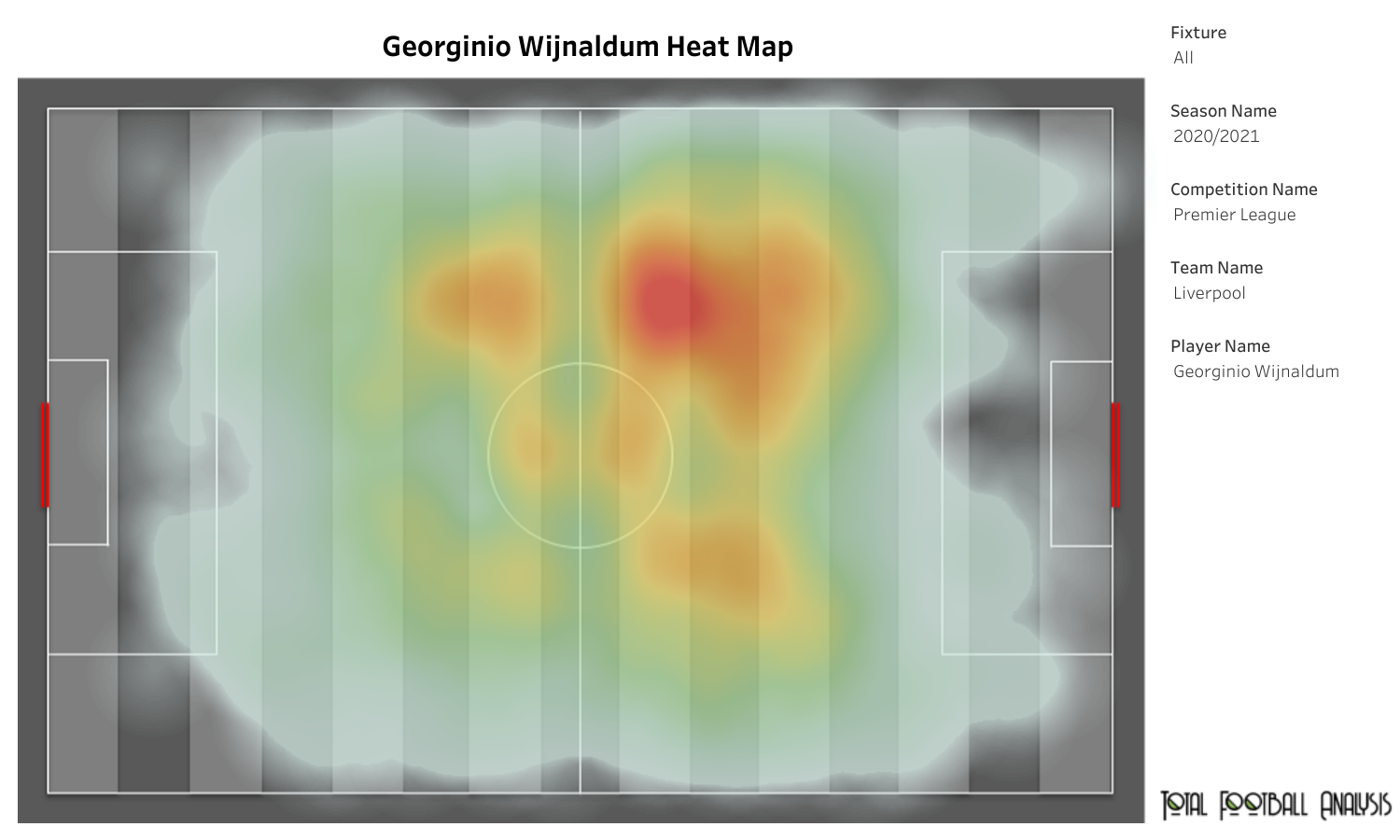 Wijnaldum was a regular under Jurgen Klopp at Liverpool. He made 51 appearances for Liverpool in the 2020/21 season and scored three goals in the whole campaign. His role was a bit different at Liverpool, where Wijnaldum pressed more and had more possession of the ball. Their front three were the main goal scorers. The above viz shows the heat map of the player from his 38 English Premier League appearances. Wijnaldum started on his favoured left side and ran from one end to the other. 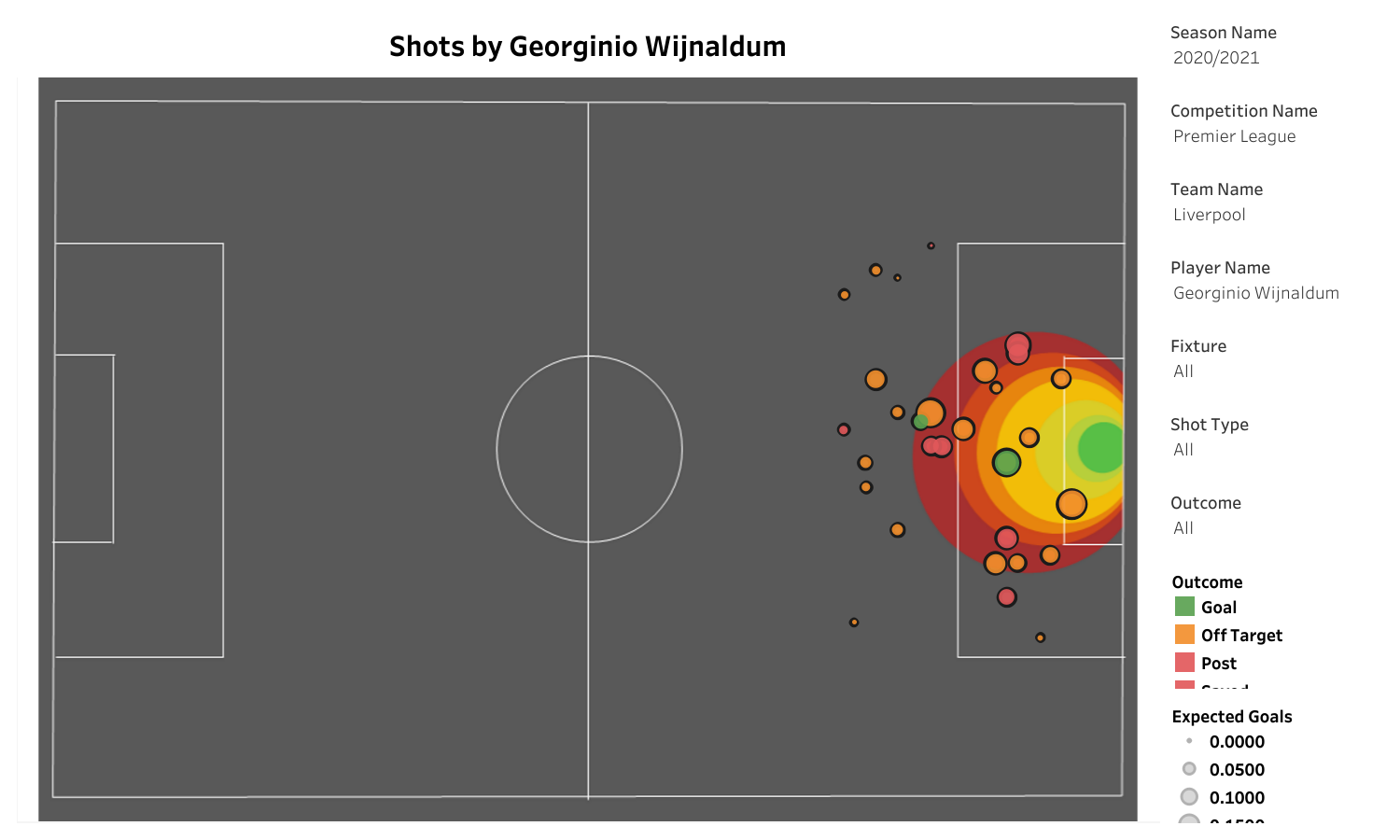 Wijnaldum was involved in 2.7 attacking actions per 90 minutes and had a 53.6% success rate. The above viz shows the shot map of the Dutchman. He averaged 0.85 shots per 90 minutes with a 26.67% shot accuracy rate. Wijnaldum can win aerial duels and has scored a few goals in his career with his head.

The 31-year-old averaged 47.5 passes per 90 minutes with a high accuracy rate of 94.2%. This shows that the player is versatile and takes different roles for his team. Wijnaldum attempted 5.7 passes into the attacking third and had a high passing accuracy of 88.44%. He can create chances and help his teammates score goals.

Georginio Wijnaldum could be a good addition to AC Milan’s midfield. He offers creativity and can press high. The player can play different roles for his side, and his experience could help AC Milan retain the title.