AC Milan are looking for strikers who could lead their charge for the Scudetto title and challenge for the UEFA Champions League next season. They have Olivier Giroud and Zlatan Ibrahimovic as strikers in their team, but both of them are towards the end of their careers. To improve their attack, the Italian club are targeting a few players who have already played on the big stage and could change the fortunes of the club. One of the recent targets that have emerged is Manchester City striker Gabriel Jesus. The signing of Erling Haaland means that Jesus is on the move away from the Etihad. A lot of European clubs are already inquiring about the Brazilian, and AC Milan are also on that list. The 25-year-old centre-forward has struggled for regular game-time this season. However, he has performed well every time he gets the opportunity on the pitch, and here are some of his season’s stats that will show why he is in demand. 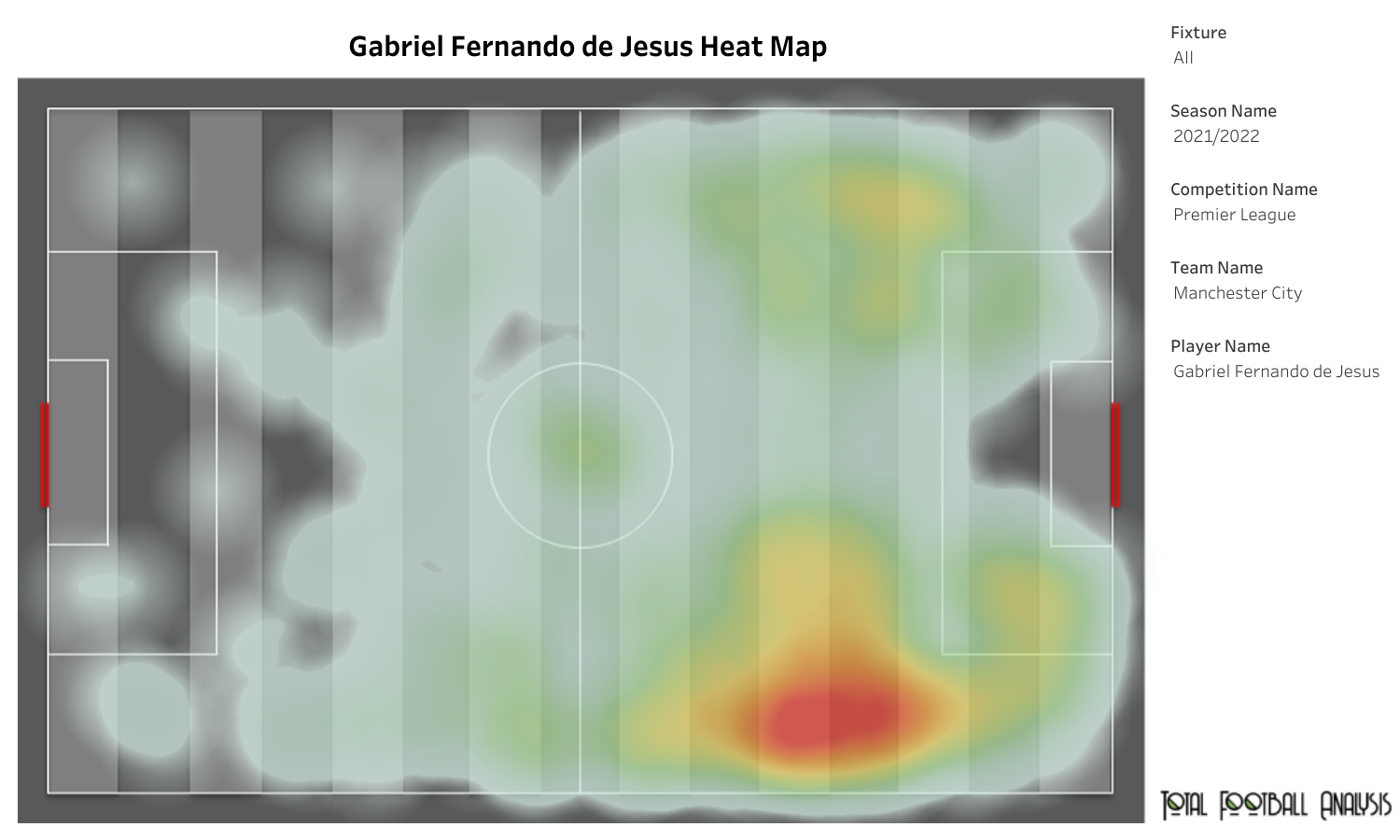 Jesus has made 20 starts in the English Premier League and has 27 appearances in total. The Brazilian has also represented City eight times in the UEFA Champions League, including three starts. The above viz shows his heat map in the English Premier League. In the initial stage of the competition, the centre-forward started on the right side. He tried to stretch the opposition defence by making full use of the field, delivering some crosses that could create some goalscoring chances. The current AC Milan strikers are only suitable for the number nine role. They do not have the pace to run at the opposition defence and create chances. Jesus has also taken 126 touches inside the opposition’s penalty box, making him a threat towards the opposition goal. 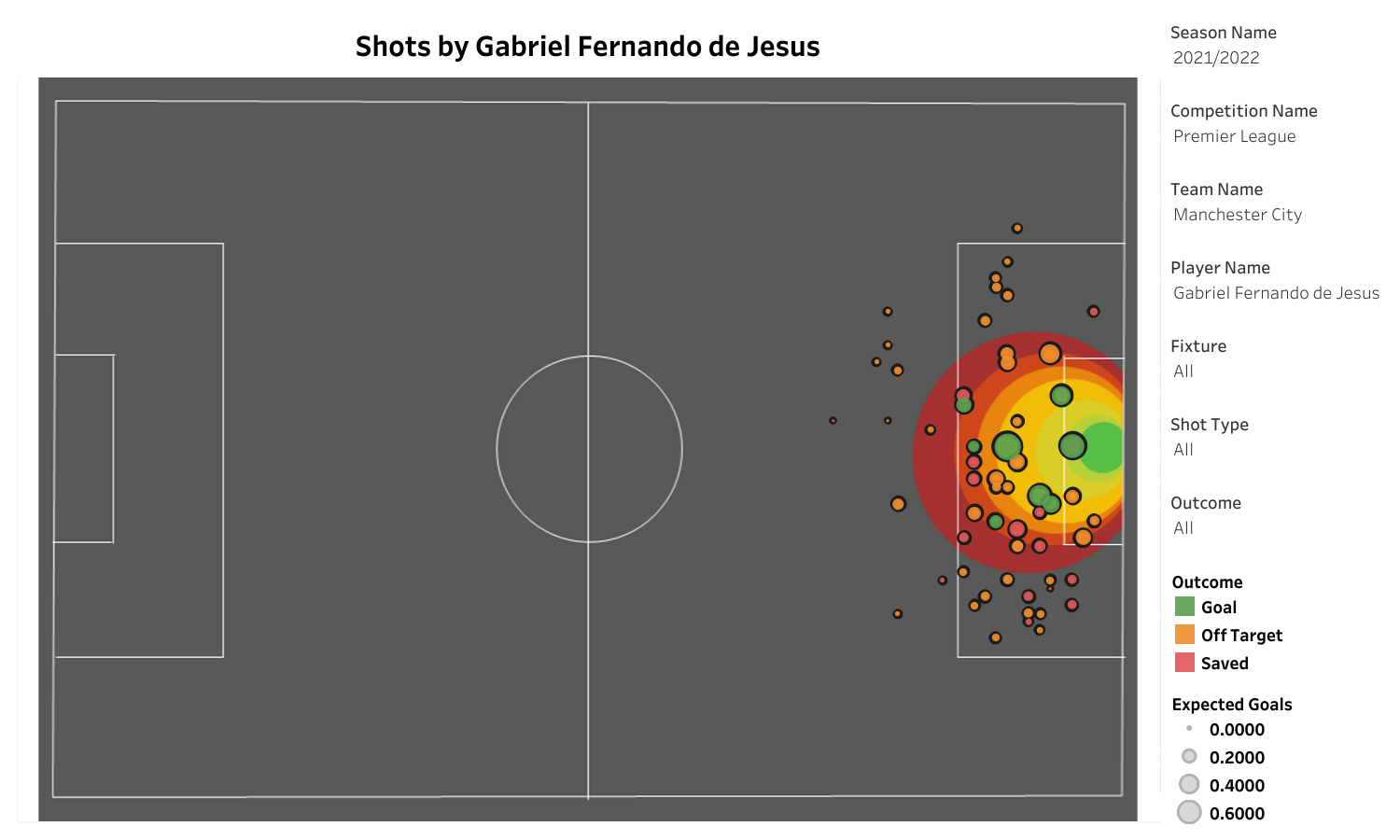 The Brazilian has scored eight goals in the English Premier League and four in the UEFA Champions League this season. The above shot map shows all the 61 shots attempted by him in the league. He has managed to hit the target 25 times, and most of the shots have been attempted from the right side. In the UCL, the player has attempted nine shots with a 66.67% shot accuracy rate. The player has scored all the goals from the left side in the UEFA Champions League. He is flexible with his positioning and can score goals from every angle. The player likes to get inside the box whenever he is playing wide and has a good striker’s instinct that has helped him score goals. 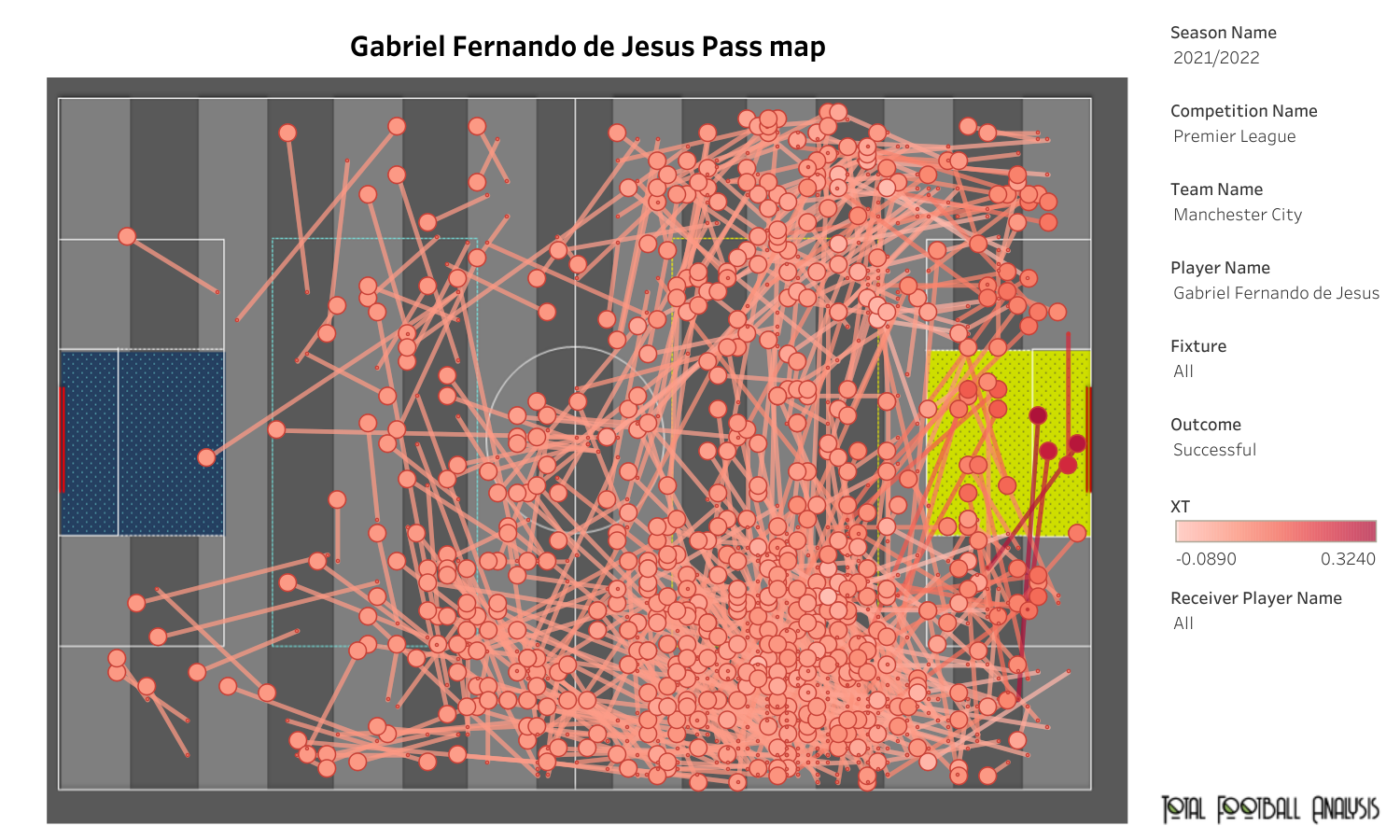 Jesus has impressed everyone with his passing this season. The forward has eight assists in the league and one in the UEFA Champions League. The above viz shows all the successful passes attempted by him. With some simple passes, Jesus has helped his side create plays on the wide sides. He has made runs past the opposition defence when he was playing towards the wide side and has delivered some crucial passes that have landed inside the opposition’s penalty box.

AC Milan scored only six goals in the group stage, and Ante Rebic was the only player who scored from the number nine position. Rafael Leao is the only player who has reached double figures in goals scored in the league. Gabriel Jesus can score goals and has the ability to make good runs inside the box. He could be a valuable addition and could provide more dynamics and pace to their ageing attack. AC Milan will look to sign him at a lower cost and challenge for the Champions League next season.