AC Milan’s recent derby win against Inter Milan has narrowed the gap between them and the defending champions. Currently, Milan is leading the Serie A table with one point more than Inter Milan, but Inter have a game in hand. Milan last won the Scudetto in 2010-11, and they haven’t won it since. This season, the players are performing well and challenging for the title. One of the players that have performed well is Rafael Leão. The Portuguese international possesses a lot of threats towards the opposition goals and has become a regular starter for the Italian side. 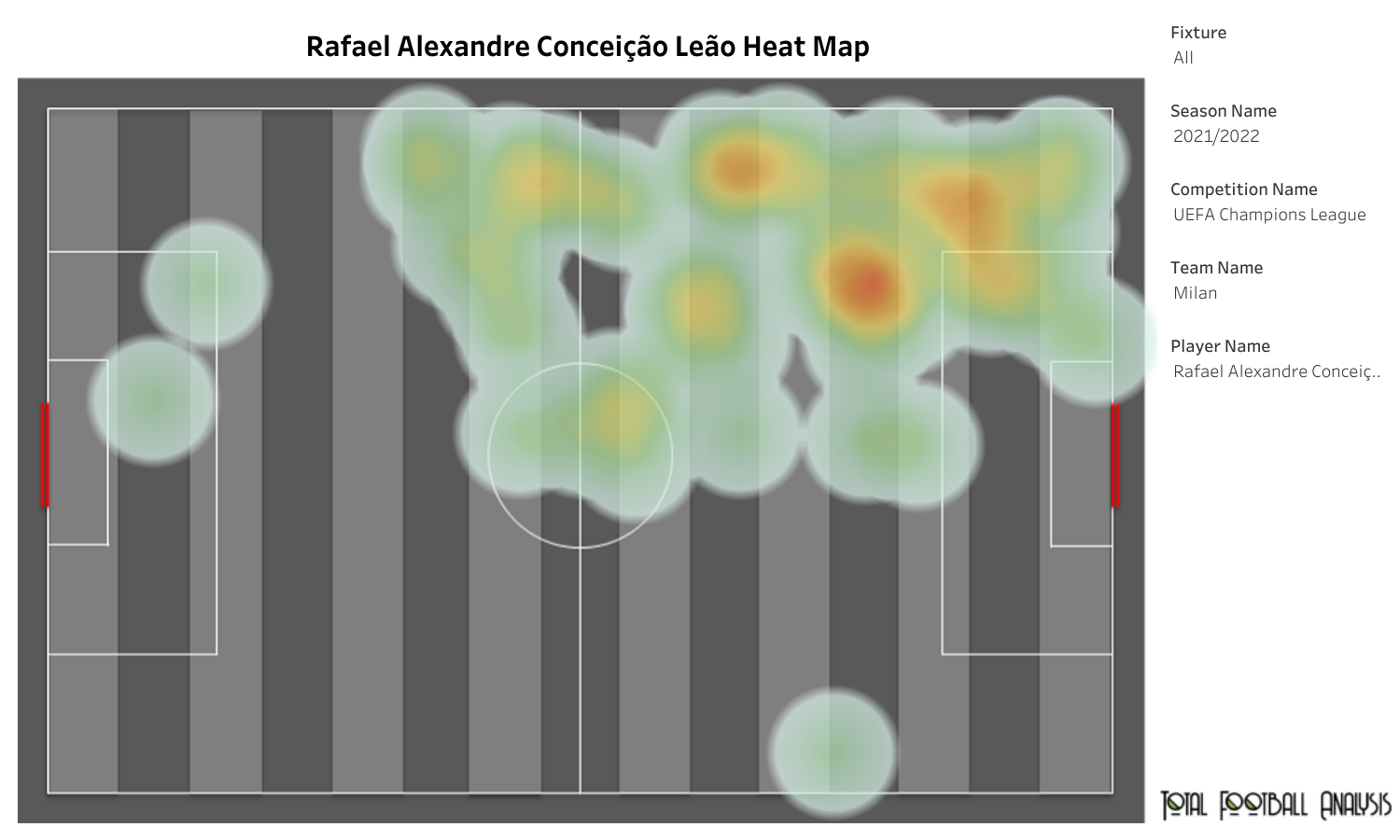 Rafael Leão made four appearances in the Champions League group stage. AC Milan failed to qualify for the next round of the competition and the UEFA Europa League as well. Leão scored a goal and provided an assist in these four group stage matches. His team plays in a 4-2-3-1 formation, and Leão plays on the left side of the midfield. From the above visual, we can observe that Leao likes to stay wide and make full use of the width. Rafael Leão is known for his pace and skills on the ball. The player attempted 36 dribbles and averages nine dribbles per match. He scored his only goal in the competition against Atletico Madrid, and the player has only attempted a single shot in the competition. Other than this, Rafael Leão has scored seven league goals in 21 appearances. 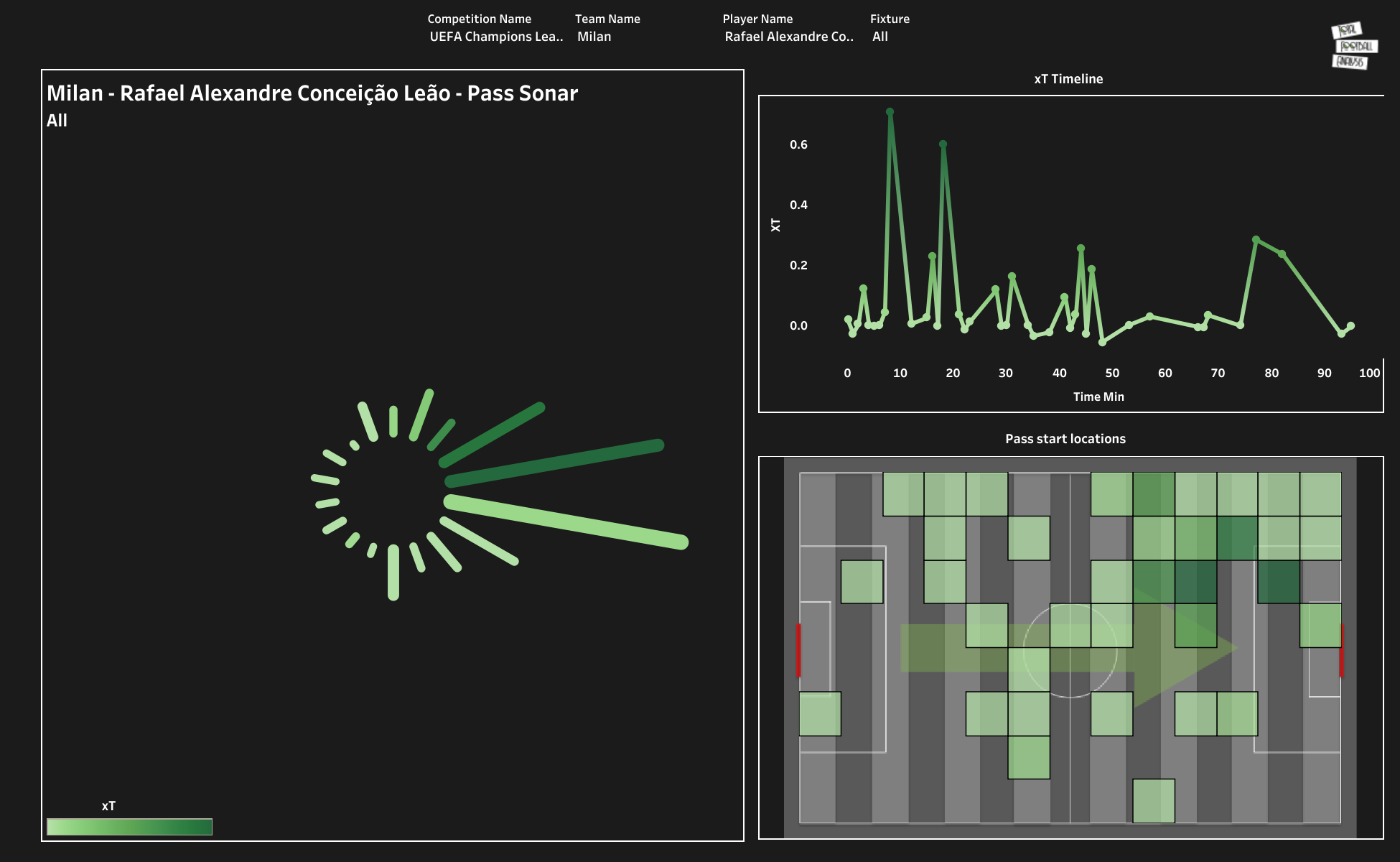 The above visual shows the pass starting location and the xT created from passes. Rafael Leão attempted most of the passes towards Theo Hernandez in the Champions League this season. He provided his only assist in the match against Liverpool, and the pass was delivered to Ante Rebic. Leão attempted 11 crosses, four smart passes, and four through passes. The xT timeline shows that he created a lot of threats with his passes at the start of the game. He has provided three assists in the domestic competition. 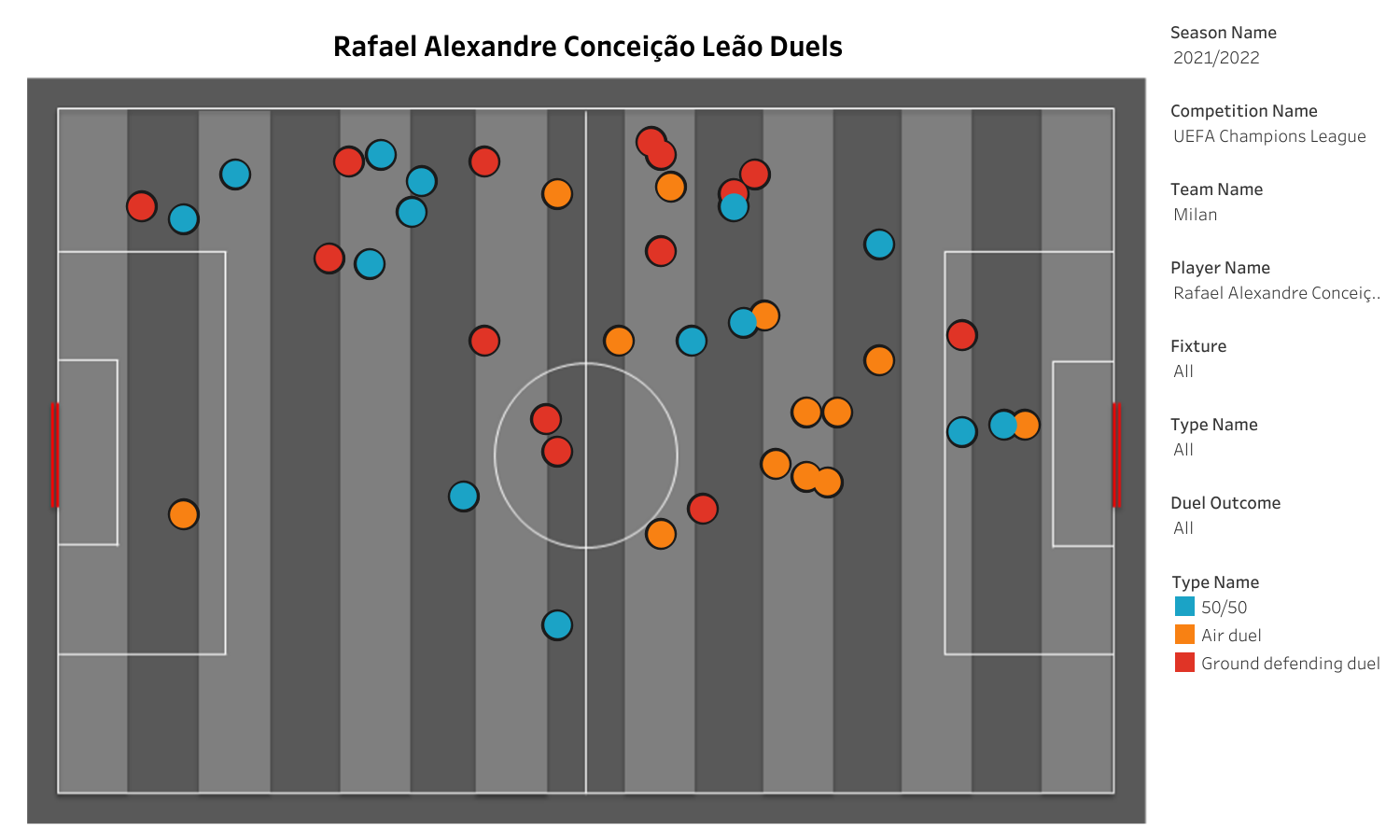 Rafael Leão has not only contributed towards the attacking side, but the player has also contributed towards the defensive cause. The above visual shows all the duels contested by the player. Leão has contested 14 loose ball duels, 14 defensive duels, and 13 aerial duels. The player has also made four recoveries, two of them inside the opposition’s half. He even made six interceptions for his team.

The 22-year-old forward player is a hot prospect for the Serie A side. He has been one of their main attacking threats, and the player has contributed towards their good run in the league. The Serie A title race is expected to go down to the wire, and AC Milan needs more contributions from their players. Leão has already contributed towards scoring goals, and the manager will be expecting more from the player in the remainder of the season.