The Serie A champions, AC Milan, are getting active in the transfer window and are looking for players who could help them in defending the league title. The Rossoneri are looking for players in defence, midfield, and attack. Their star midfielder, Franck Kessie, is on the move away to Barcelona. AC Milan identified Renato Sanchez as his replacement and are continuously negotiating to acquire his services. There are several other transfer targets, and one of the latest players AC Milan have set their eyes on is Aston Villa’s defensive midfielder, Douglas Luiz. The Brazilian joined the Aston Villa from Manchester City in 2019. The 24-year-old has been one of the best young midfielders in the league and has performed consistently at the top level. 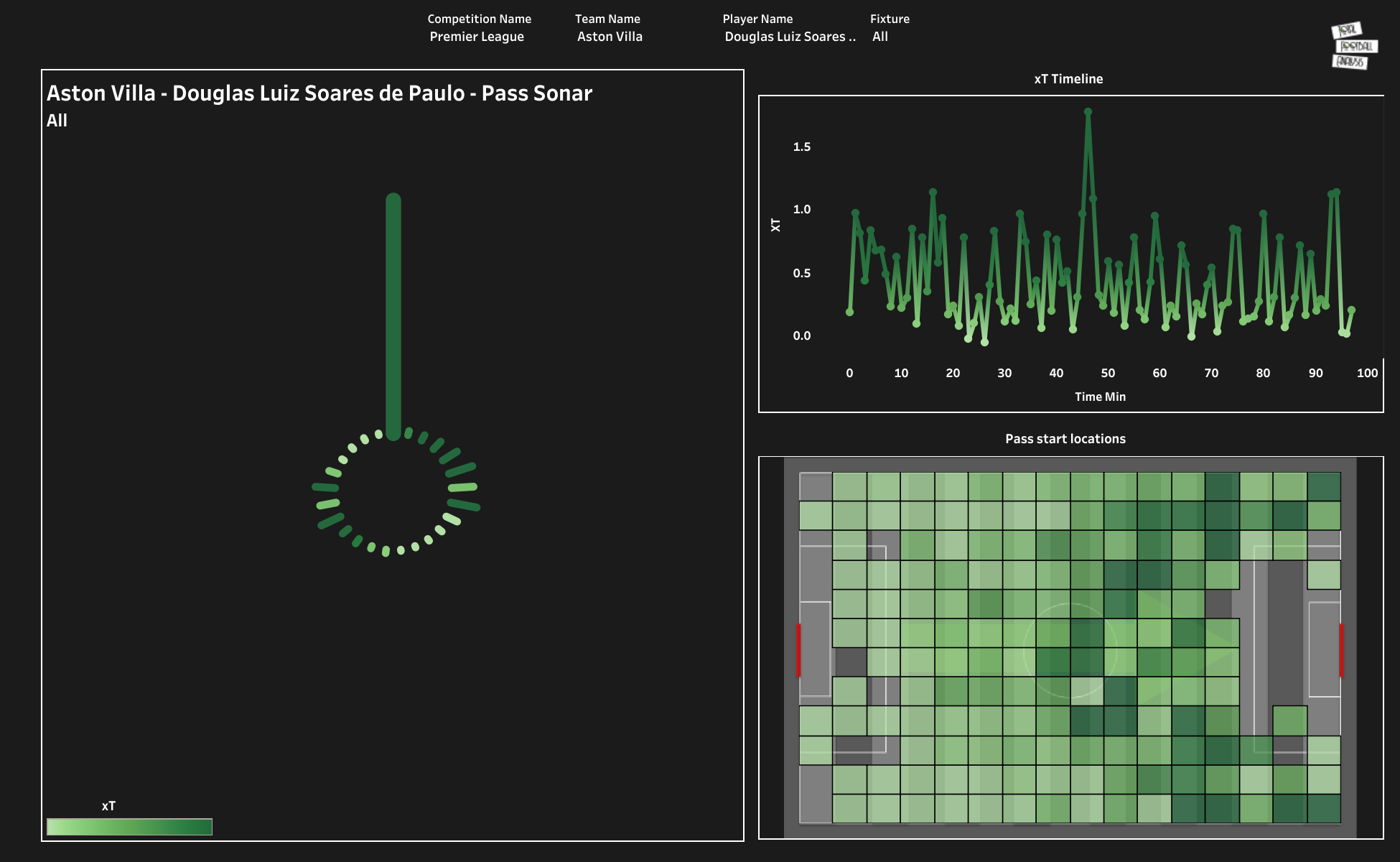 Luiz made 34 appearances for Aston Villa in the English Premier League in the 2021/22 season. He played in the heart of the midfield and scored two goals. The above viz shows the pass start location and the threat created from passes at different time intervals. It can be observed that Luiz played an advanced role. He covered a lot of areas on the pitch and was the set-piece taker on his side. The Brazilian averaged 39.4 passes per 90 minutes with an accuracy rate of 87.71%. Of these 39 passes, around five were attempted into the attacking third. The 24-year-old used to build-up play from the middle and create more threats from passes attempted from inside the attacking third.

The midfielder is also not shy of attempting shots and had 22 attempts towards the opposition goal. Luiz managed to hit the target eight times. He likes to take long-range shots but scored both goals from inside the opposition’s 6-yard box. The midfielder was involved in 3.6 attacking actions per 90 minutes and had a 43% success rate. Overall, he had less involvement in the attack.

The midfielder was more involved in defensive actions. He made 11.48 defensive actions per 90 minutes and had a 71.6% success rate. The above viz shows all the duels that were won by the player or the duels that ended in a neutral result. Douglas Luiz contested 7.31 defensive duels, 1.95 aerial duels, and 3.23 loose ball duels per 90 minutes. He won 20% of defensive duels, 37.5% of aerial duels and 41.51% of loose ball duels. By looking at the above viz, we can observe that the Brazilian won most of the defensive duels inside his team’s half. He featured more towards the left side and won most of his duels on that side. He is not shy of making tackles and has received eight bookings, including one red card.

The 24-year-old Brazilian is a young prospect and could become a part of AC Milan’s legacy. He is on the transfer radar of a few clubs, and AC Milan are the favourites to sign him as of now. He could end up playing in the UEFA Champions League next season.