AC Milan’s transfer window this season has not gone as per their expectations. They were targeting centre-backs, right-wingers, central midfielders and a forward to boost their chances of retaining the league title. Divock Origi was signed as a striker from Liverpool, and Charles de Ketelaere, the right-winger, was the recent capture from Club Brugge. They failed to sign their top defensive target, Sven Botman, and top midfield target, Renato Sanches. With the transfer window still open, the Rossoneri have a chance to sign some players. Some of their players have returned from injuries and their respective loan spells. Do AC Milan have enough bench strength to contest for the league title and qualify for the knockout stages of the UEFA Champions League? Let us look at the teamsheets of the last 2-3 matches to get an idea of whether AC Milan’s squad has enough members going into the new season.

AC Milan began their Serie A season with a 4-2 win over Udinese. The defending champions came from a goal behind to take three points from the game. Milan were without star midfielder Sandro Tonali and veteran striker Zlatan Ibrahimovic for this match. Stefano Piolo gave some of the new signings a few minutes on the pitch. 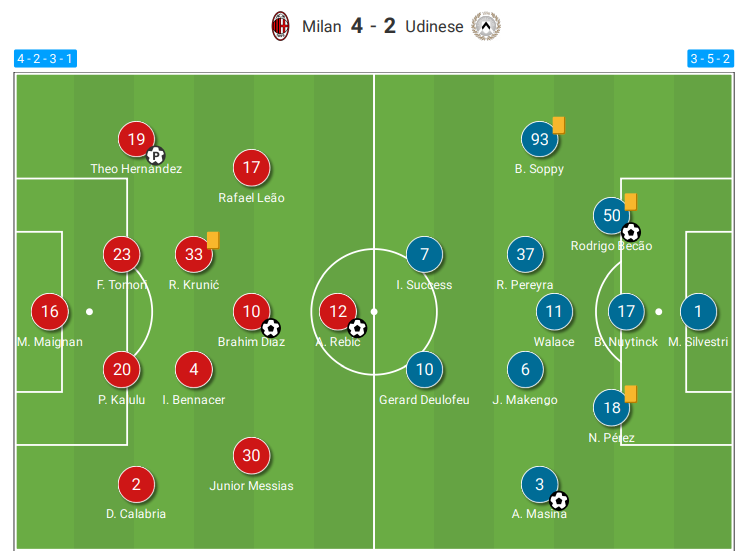 AC Milan started the match in a 4-2-3-1 formation. All the new signings were featured on the bench. Ante Rebić led the line ahead of Olivier Giroud and Origi. Rafael Leao was their star player last season, and he is likely to play every game on the left wing. Junior Massias got the nod ahead of Alexis Saelemaekers and new signing de Ketelaere. In the absence of Tonali, Rade Krunić got a start in the team. The back four featured familiar faces from last season. 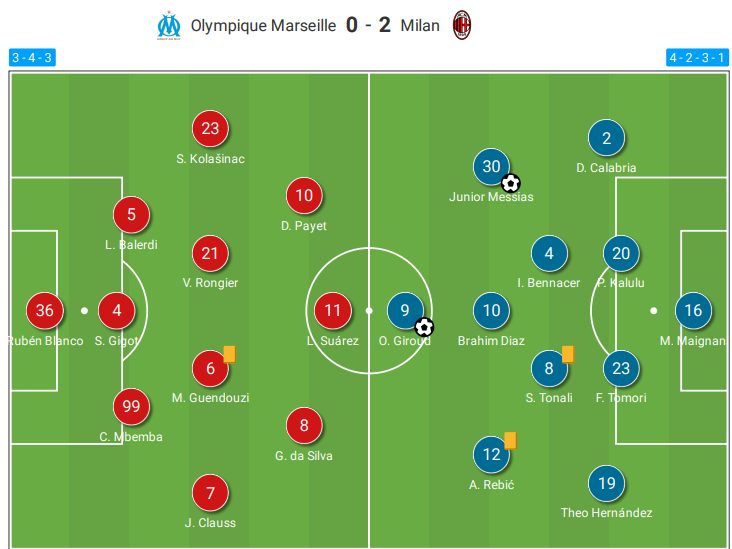 AC Milan played a friendly against Marseille with the same formation. Giroud led the attack, and Rebić featured on the left side in this match. Tonali was in charge of the midfield alongside Ismaël Bennacer. Piolo’s men will be playing in the same formation throughout the season. His strongest starting XI with the current players will be as follows. Mike Maignan will stand between the sticks. Theo Hernández, Fikayo Tomori, Pieere Kalulu, and David Calabria will form a defensive wall in front of the keeper. Tonali and Bennacer remain the first-choice central midfielders following the departure of Franck Kessie. Rebić is likely to lead the line and will be supported by Leao on the left, Brahim Díaz in the centre, and de Ketelaere is likely to feature on the right.

AC Milan now have enough attacking options after the signing of Origi and de Ketelaere. Rebić, Origi, Giroud and Ibrahimovic will play in the number nine role. Rebić will also be a backup for Leao on the left. Díaz will get competition from youngster Yacine Adli and new signing de Ketelaere, who can also play as an attacking midfielder. Messias will fight with Saelemaekers and de Ketelaere for a spot on the right.

The midfield is a bit short of options, with only Tiemoue Bakayoko, Krunić, and Tommaso Pobega left as the midfield options who could come off the bench. Bakayoko is on loan from Chelsea and might leave the club for regular football. They need to sign a midfielder who could accompany Tonali.

The defence is a bit of a worry for the manager. The full-back positions are secured with Fodé Ballo-Touré as back-up on the left and Allesandro Florenzi on the right. Their centre-back pairing is a little bit inexperienced, and they need someone who can command the players from the back. The veteran Simon Kjær and Matteo Gabbia are the only two centre-back options on the bench. This is a concern because most of the Milan defenders spent their time on the treatment table last season. Kjær is also in the last years of his career and is unlikely to play regular football.

AC Milan need to sign a midfielder and a defender before the closing of the transfer window. They have a young squad, and the manager needs to add a bit of experience to retain the Serie A title and play in the UEFA Champions League. They will look to sign players for these positions and perform better than last season. As of now, the bench is weak for AC Milan.