AC Milan signed AS Roma’s right-back, Alessandro Florenzi, at the start of the 2021/22 season on a season-long loan. The full-back won the first league title of his career in his only season for the Rossoneri. AC Milan were without a second choice right-back and had no defensive cover for Davide Calabria. Florenzi had spent the previous season on loan at French club Paris St. Germain. AS Roma were also letting him leave on loan, and Milan took advantage of the situation. Overall, the right-back made 30 appearances and scored on two occasions. He also played a few minutes in the UEFA Champions League,

Alessandro Florenzi made four UCL appearances, all of them after coming off the bench. He spent 114 minutes on the pitch and featured against Atletico Madrid and Liverpool in both home and away fixtures. He was unable to provide goalscoring contributions due to the lack of minutes he spent on the pitch. However, Florenzi is an attacking full-back and has been a regular part of the national side. 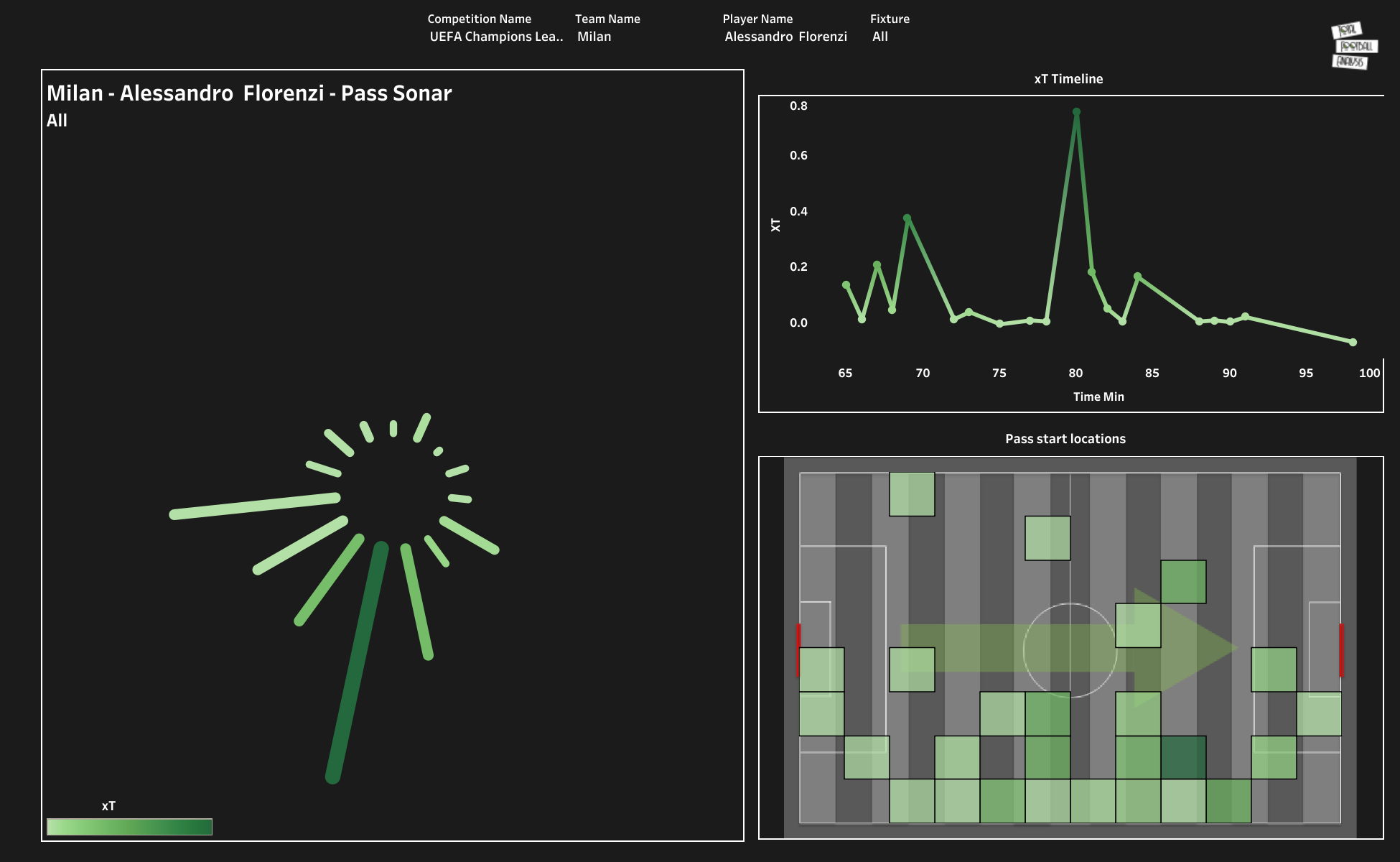 The above viz shows the pass start location and the threat created by the passes at different time intervals. Florenzi made appearances after the 65-minute mark, and therefore, his graph shows only the last few minutes of the match. The pass start location map shows that the player played a high attacking line and even attempted passes from inside the opposition’s penalty box. He took only one touch inside the penalty box. The 31-year-old full-back attempted 33 passes with a pass accuracy rate of 69.69%. These 33 passes included two crosses, nine long passes, and three smart passes.

Florenzi even managed to attempt three shots during these matches but failed to hit the target.

The full-back contested 18 duels in these four appearances. Of these, he contested seven defensive duels and aerial duels each. The other four duels contested were loose ball duels. Most of the duels were contested in his team’s half. His other defensive contributions included five interceptions and nine recoveries. Of these nine recoveries, one was made inside the opposition’s half.

Alessandro Florenzi got very few minutes on the field, but the player tried his best to score goals and defend for his side. He is an attacking full-back and possesses a threat going forward. AC Milan should make a permanent move for the 31-year-old full-back. He could once again play a crucial role in winning back-to-back Serie A titles and reaching the knockout stage of the UEFA Champions League.