AC Milan are on the verge of claiming another Serie A title since 2012. They are two points ahead of their rivals, Inter Milan, with one game in hand. To get their hands on the title, AC Milan must win the last game against Sassuolo away from home. The Rossoneri are on a five-match winning streak and a 15-match unbeaten streak in the league. One of the main reasons behind their success this season is the contribution of every player. Stefano Pioli’s men are not dependent upon a single player. Their early exit from the UEFA Champions League shifted their focus to claiming the league title. Players like Rafael Leao, Sandro Tonali, Olivier Giroud, and others, stepped up to the task and made some crucial contributions in their run to claim the Scudetto. 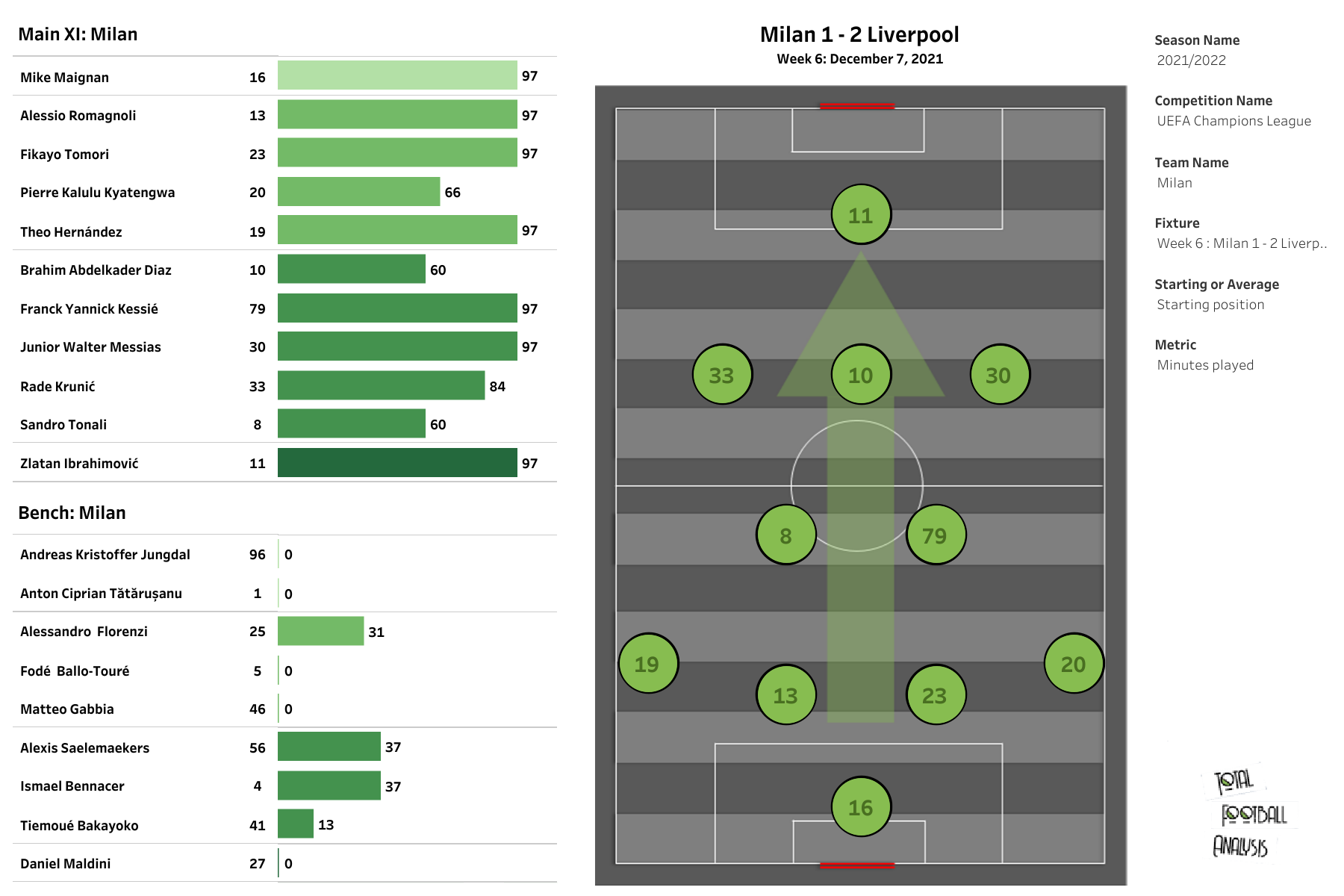 AC Milan have played in a 4-2-3-1 formation throughout the season. The above viz shows their formation in their last UEFA Champions League 2021/22 fixture played against Liverpool. AC Milan were without some of their main players due to injury issues. Rafael Leao, Olivier Giroud, Davide Calabria, Ante Rebic, and a few other players were in the treatment room. The manager made some changes and replaced them with similar kinds of players.

Mike Maignan has been ever-present in goal for the Serie A side. He has already won the Golden Glove award for keeping 16 clean sheets in 31 appearances. Theo Hernandez is also a threat to the opposition on the left side. He has made some crucial attacking as well as defensive contributions in the league. The Frenchman has scored five goals and provided six assists in the league. Fikayo Tomori has impressed on his loan spell at the club. Injuries to some of the senior defenders have given him more game-time on the pitch. His performances have lured the club to sign him on a permanent deal. 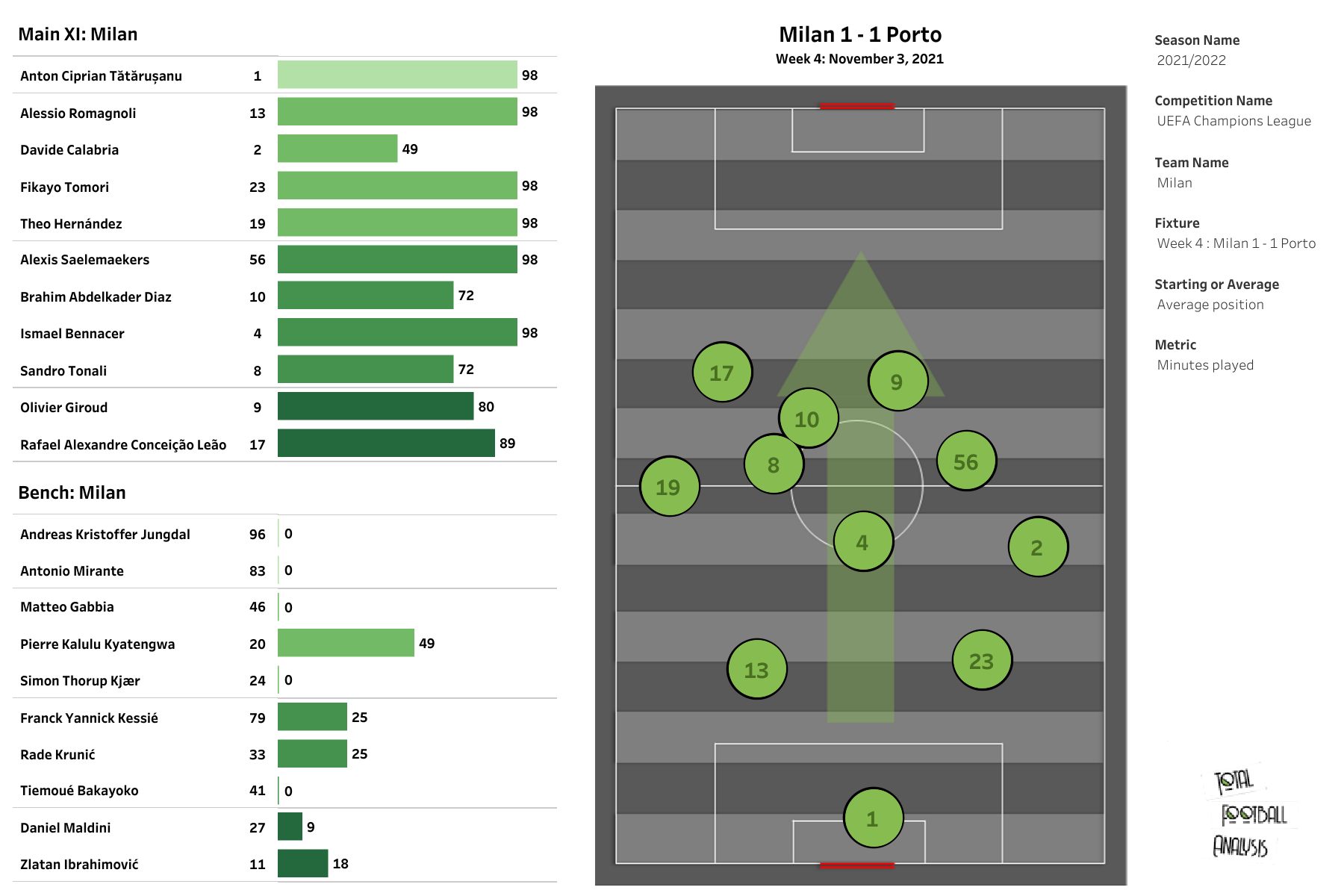 The above viz shows the average position of AC Milan players in their fourth match in the UEFA Champions League. Stefano Pioli likes to lineup his squad with two box-to-box midfielders who can provide extra support to the attack and defend at the same time. Franck Kessie and Sandro Tonali have formed a solid midfield partnership. The former came off the bench in this game, but these two players are the first-choice central midfielders. We can observe that one of the midfielders is holding his position and the other is playing a free role for their side.

Rafael Leao is the main attacking threat for the Serie A leaders. He has scored 11 goals and provided six assists by featuring on the left side. Brahim Diaz and Rade Krunic have featured in the number ten role behind the striker. The right-wing lacks creativity, but youngster Alexis Saelemaekers has provided some attacking stability to his side. Olivier Giroud has been the main striker and has scored nine goals. He is known for his link-up play and allowing the other players to run towards the opposition defence. The veteran striker, Zlatan Ibrahimovic, has also contributed by scoring eight goals.

AC Milan have impressed as a team, and this is the main reason behind their success this season. Stefano Pioli has used his resources well and everyone has contributed to the team. They will look to seal the title by winning the final game of the season.